Taal is only 30 miles (50 kilometers) south of Manila on the island of Luzon in the Philippines. The black area in the center of the image is Taal Lake, which nearly fills the 18-mile-diameter (30-kilometer) caldera. The caldera rim consists of deeply eroded hills and cliffs. The large island in Taal Lake is known as Volcano Island It also contains a crater lake. The bright yellow patch on the southwest side of the island marks the site of an explosion crater that formed during a deadly eruption of Taal in 1965 (see photos below). The image was acquired by the Spaceborne Imaging Radar-C/X-band Synthetic Aperture Radar (SIR-C/X-SAR) aboard the space shuttle Endeavour on October 5, 1994. The image shows an area approximately 56 kilometers by 112 kilometers (34 miles by 68 miles). North is toward the upper right of the image. Source of image: SIR-C/X-SAR Space radar images of Earth at Jet Propulsion Laboratory. P-44903 November 18, 1994 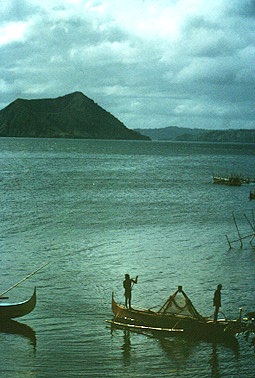 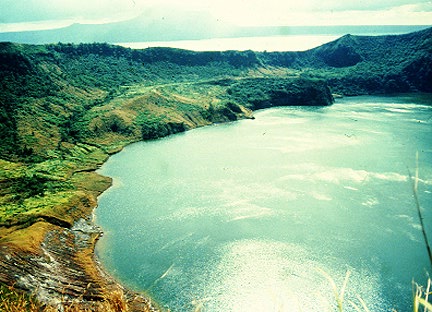 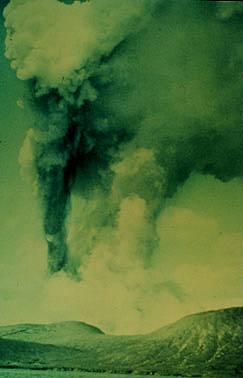 Since 1572, Taal has erupted at least 34 times. The most recent large eruption (VEI=4) was it September 1965. The eruption began with the ejection of basaltic spatter. This was followed by the main phreatic eruption that opened a new crater on the southwest side of Volcano Island. Ash was ejected from the vent to heights as great as 12 miles (20 km). Photograph by J.G. Moore, U.S. Geological Survey, September, 1965. 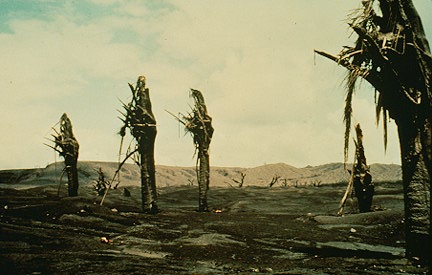 A flat, turbulent cloud of material spread laterally away from the volcano. Called a base surge, this cloud move at hurricane velocity and was made of ash, mud, lapilli, and blocks. This photo shows the effect of the base surge on palm trees about 2.5 miles (4 km) from Taal. Photograph by J.G. Moore, U.S. Geological Survey, September, 1965. 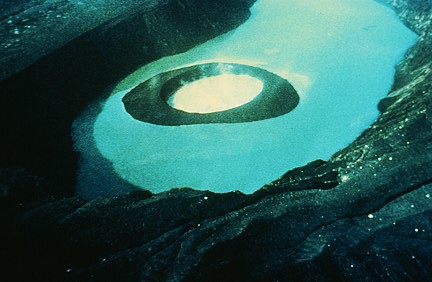 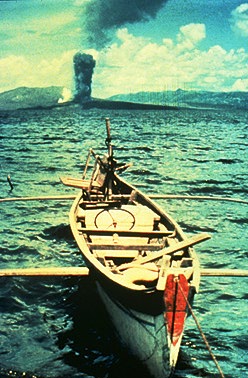 Cloud from a small explosion during the waning stage of the eruption. Photograph by J.G. Moore, U.S. Geological Survey, September, 1965.

Since early 1991, the volcano has been restless, with swarms of earthquakes, new steaming areas, ground fracturing, and increases in water temperature of the lake. Volcanologists and other local authorities are carefully monitoring Taal to understand if the current activity may foretell an eruption. Taal is one of 15 "Decade Volcanoes" that have been identified by the volcanology community as presenting large potential hazards to population centers.