The size and density of Io are about the same as the Earth's Moon. Since pieces of the Moon have been directly sampled and found to be made of silicate minerals (minerals with silicon and oxygen), scientists have suggested that most of Io is also made of silicates. In contrast, the red color of Io (the reddest object in the Solar System) and spectra from the surface indicate that sulfur is present.

The variation of viscosity with temperature for molten sulfur is also unusual:

As temperature decreases the viscosity initially increases. At about 175C, the viscosity drops dramatically almost 4 orders of magnitude while the temperature drops only 40C. This means that lava flows actually get more fluid as they cool (the opposite is true of the silicate lava flows of Earth).

All of the colors listed above have been observed on Io and are best explained by the eruption of sulfur. The color changes with cooling help to map the eruption temperatures of volcanic products on Io. Surface compositions probably consist of: sulfur at various temperatures, anhydrous mixtures of sulfur allotropes with sulfur dioxide frost, and sulfurous salts of sodium and potassium.

Some planetary geologist believe silicate AND sulfur volcanism occur on Io. The presence of mountains with 9 km of relief suggests silicate material is involved because sulfur and its compounds does not have enough strength to support such features. Likewise, the relief along the edges of plains and within patera calderas could not develop if the surface material was all sulfur. The large size of the calderas on Io requires that the crust is strong and at least 10-20 km thick. A more likely scenario is a thin veneer of sulfur or sulfur compounds over a crust of silicate rocks. Silicate volcanism is probably high-volume low viscosity (basalt) lava flows erupted from low shields and possible fissures.

The presence of hot spots (not to be confused with hot spots on Earth) also supports the presence of silicate volcanism. Hot spots are active or recently active volcanic regions on Io. They are recognized by high thermal emissions. Using a Near-Infrared Mapping Spectrometer (NIMS), 30 hot spots have been detected. The NIMS image on the left shows Loki Patera on February 21, 1997, as Galileo made its sixth orbit. The image on the right was taken on March 12, 1997, using the Infra-Red Telescope Facility (IRTF) on Mauna Kea, Hawaii. The image shows the enormous amount of heat generated at Loki during an eruption. 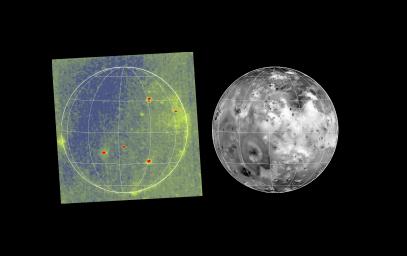 The Galileo image on the left shows volcanic hot spots on Io's darkside. Io was in Jupiter's shadow when the image was taken. This is the highest-resolution image ever acquired of hot spots. The mosaic of Voyager images on the right shows the locations of the hot spots seen in the Galileo image. Image courtesy NASA/JPL.

The hot spots (volcanic centers) are named after mythological figures associated with fire and thunder: Janus, Hi'iaka, Zal, Gish Bar, Sigurd, Monan, Altjirra, Amirani, Maui, Malik, Tupan, 9606W, Prometheus, Culann, Zamana, Volund, Aidne, Fo, Sethlaus, Rata, Lei-Kung, Isum, Marduk, 9611A, Kurdalagon, Mulungu, Pillan, Pele, Daedalus, W. Pele, and Loki. Lopes-Gautier and others (1997) lists the latitude and longitude of these hot spots. The temperatures range from about 100 to 333 degrees Celsius over areas of 192 to 3 square km. All of these hot spots are within 50 degrees of the equator. Hot spots at higher latitudes, if the exist, may be detect by later orbits of the Galileo probe. Ten of the hot spots detect in 1979 were still active in 1997.

High resolution images of hot spots using Galileo's CCD system are interpreted to be caldera floors (actively convecting lava lakes) and/or possibly pahoehoe lava flows. The small areas are thought to have temperatures of at least 725 degrees Celsius or higher (Note: these temperatures are higher than the boiling point of sulfur in a vacuum). These images are some of the best evidence for active silicate volcanism (possibly basalt) on Io.