Sections of the Ring of Fire, subduction zones that surround much of the Pacific Ocean, are underwater. Submarine volcanoes at these convergent plate boundaries are much like their counterparts on land. Many of these volcanoes form new islands that last only a short time.

Left:  Perhaps the most famous submarine volcano is Krakatau, a submerged caldera located between Java and Sumatra. The 1883 eruption killed at least 36,400 people. Most of these people were killed by tsunami.

Above:  Metis Shoal, a submarine volcano near the Tonga Islands, has erupted nine times since 1851. The summit of the volcano is only a few meters below sea level. The 1979 eruption lasted more than two months, producing a small island that lasted several months before being washed away, and sending rafts of pumice as large as 15x30 miles (25x45 km) floating to the northwest. The most recent eruption began in early June of 1995. As an island grew above sea level a lava dome, about 90 feet feet (30 m) high and 450 feet (150m) is diameter, formed in only a few days. Explosions threw ash to heights of 1500 feet (500 m). A week later the dome was three times larger. The dome stopped growing in late June and may resist erosion for some time. Photo of the dome courtesy Brad Scott, June 28 1995, while on board the Tongan tug Hifofua.

Right:   Kavachi, a submarine volcano in the Solomon Islands, has built itself above sea level at least nine times since 1950. The volcano has had 25 known submarine eruptions since 1938. Most of these eruptions include small to moderate explosions. This photograph was taken by John Grover in the early 1960s. Slide courtesy U.S. Geological Survey.

Left:   Another very active submarine volcano is Monowai seamount, about midway between the Tonga and Kermadec island groups. The volcano is about 3,000 feet (1,000 m) high and less than 600 feet (200 m) below sea-level. Monowai has erupted at least eight times since 1977. An eruption was suspected in 1944. Most eruptions were detected using acoustics but during the 1977-1979 eruption upwelling and discolored seawater was observed. Monowai erupted most recently in September of 1996 and in April of 1997. Top: Bathymetric map of Monowai seamount. The contour interval is 100 m. Bottom: Profile across Monowai seamount. Vertical exaggeration = 3.7. From Davey (1980). 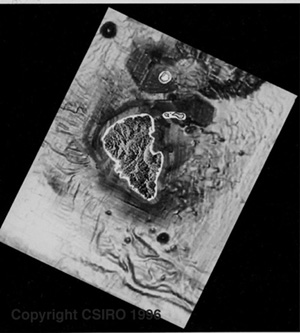 Right:  The New World Seamount (top corner of this image),north of Lihir island in Papua New Guinea is 2.5 miles (4 km) wide at its base and has a conical peak. The volcano rises about 1,800 feet (600 m) off the seafloor and has a deep central crater. Sheet and pillow lava flows, volcanic breccias and lag deposits have been photographed at the summit. This seamount is extinct and never rose above sealevel. The subaerial SAR data of Lihir Island was supplied with permission by Lihir Mining Co. Ltd., while the bathymetry data was collected during the R/V SONNE SO-94 Research Cruise (EDISON PROJECT) organized by Freiberg University of Mining & Technology and funded by the German Federal Ministry for Research and Technology (BMFT Grant 03G0094A to P. Herzig). Additional information about the seamount and other seamounts and volcanoes in the area is available on the CSIRO Exploration & Mining (Magmatic-Hydrothermal Cu-Au Group) homepage.

Some submarine volcanoes host economic deposits of metals. For example, Kuroko deposits, named for an occurrence in Japan, are hosted in dacite and rhyolite domes and their associated breccias that formed on the basaltic ocean floor. Deposits of zinc, copper, lead, and gold formed when the volcano was active. The volcanoes are later uplifted above sea level or added to the margin of the continent. Modern volcanoes that are forming this type of deposit are found in back-arc basins, areas of rifting behind active volcanic arcs. Understanding modern volcanic environments helps geologist search for more metal deposits. This cross-section of a typical Kuroko deposit is from Sato (1974) and Franklin and others (1981).