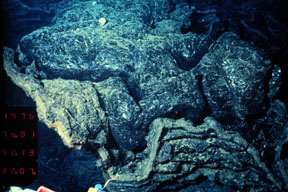 If the global estimate of one million submarine volcanoes is correct perhaps many thousands of these volcanoes are active. In contrast, few submarine volcanoes are caught in the process of erupting. Of the nearly 8,000 known volcanic eruptions in the last 10,000 years only about 300 were submarine. From 1975 to 1985, 160 volcanoes erupted but only 24 of these were submarine. Most of these submarine eruptions were in shallow water. Recent technological advances have allowed volcanologists to detect and respond to eruptions, even eruptions in very deep water. This close-up photo shows a drip of the 1991 lava flowing over the irregular surface of the margin of the axial summit collapse trough, depth 8,216 feet (2505m). Photography courtesy of Woods Hole Oceanographic Institution and members of the Adventure dive (Principle Investigators: D. Fornari, R. Haymon, K. Von Damm, M. Perfit, M. Lilley, and R. Lutz). 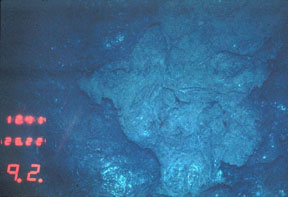 Volcanologists use the following types of observations to recognize very recent eruptions at the East Pacific Rise:

The following are descriptions of a few of the recent and well documented submarine eruptions. 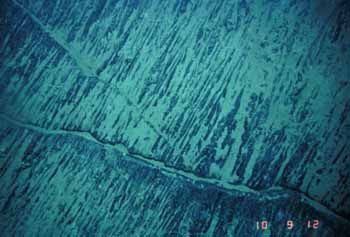 Several lines of evidence indicate that Axial volcano has erupted in the last few years. Photos and sidescan sonar data show fresh lava at the summit and along one rift. Subsidence in the summit caldera, possibly coincident with an intrusion into or eruption on a rift, was measured in 1988. Three different geophysical methods suggests a magma body only 1-2 km below the caldera floor (see Applelgate and Embley, 1992). This photo shows a flat "lineated" sheet flow in the summit caldera of Axial Volcano. The grayish material is pelagic sediment deposited since time of eruption. Photo is from a towed camera system and courtesy of NOAA.