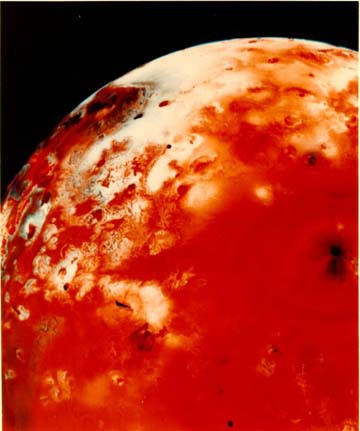 The Voyager probes obtained images of about 35% of Io at a resolution of 5 km. In some areas resolution was as good as 0.5 km. These images allowed geologic maps of Io to be constructed. Geologists could recognize mountains, plains, and volcanic vents, and the relative ages of these features. Nine eruption plumes were discovered during the Voyager 1 mission. Voyager 2 arrived four months later. Voyager 1 image taken on the morning of March 5, 1979 at a range of 377,000 kilometers (226,200 miles).

Galileo was launched in 1989 and entered orbit around Jupiter on Dec. 7, 1995. Project Galileo: Bringing Jupiter to Earth describes the spacecraft, mission, images and results.

Future observations: Io is the most volcanically active body in the solar system. Scientists hope to learn more about the fiery satellite when Galileo continues its studies over the next two years, during a mission extension known as the Galileo Europa Mission. The extended mission will include eight additional encounters of Europa, four of Callisto, and two close Io flybys in late 1999, depending on spacecraft health. Galileo will pass very close to Pillan Patera in the first of the two Io flybys, so high- resolution images can be acquired over a small portion of this area.

The NASA Infrared Telescope Facility (IRTF), on Mauna Kea, Hawaii, collects infrared images of Io when the satellite is observable. This data set is in support of images collected during the Galileo mission. The images can detect eruptions and, under the right conditions, the active volcano. This telescope provides better time coverage and time resolution of volcanic activity on Io compared to Galileo observations.

The images from the telescope have detected very hot events (>1220 C) that lasted days or weeks (Spencer and others, 1997). Some events are located at known calderas. Loki, Io's most powerful single volcano, appears to have periods of increased activity that last several months. Interestingly, not all hot events are associated with plumes or surface changes.

The Infrared Telescope Facility at Lowell Observatory in Arizona has detected thermal emissions on Io caused by violent silicate eruptions, possibly from fire fountains or the overflowing of lava lakes. 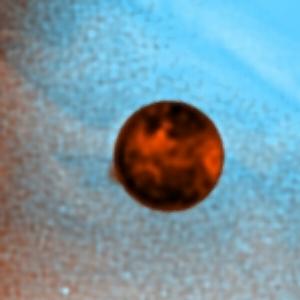 The Hubble Space Telescope (HST) has been used to observe Io. For example, between March 1994 and July 1995 a major brightening (eruption) was observed at Ra Patera. HST has also observed eruption plumes from Pele such as the one shown in the above image. Plume height is about 400 km. These observations allow estimates of the plume density, composition, and mass and detection of rapid changes in plumes.

‹ Sulfur vs. Silicate up Other Io Information ›