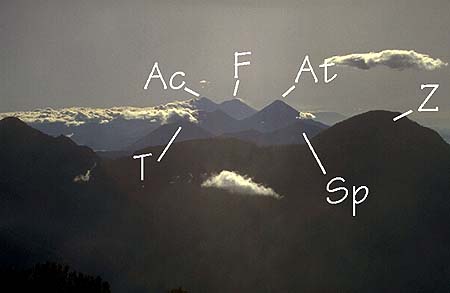 Strato Volcanoes comprise the largest percentage (~60%) of the Earth's individual volcanoes and most are characterized by eruptions of andesite and dacite - lavas that are cooler and more viscous than basalt. These more viscous lavas allow gas pressures to build up to high levels (they are effective "plugs" in the plumbing), therefore these volcanoes often suffer explosive eruptions. Strato volcanoes are usually about half-half lava and pyroclastic material, and the layering of these products gives them their other common name of composite volcanoes. The lava at strato volcanoes occasionally forms 'a'a, but more commonly it barely flows at all, preferring to pile up in the vent to form volcanic domes.

Left:  Here is a nice family of Guatemalan strato volcanoes. This view is towards the East from the summit of Santa Maria Volcano, and the volcanoes are Acatenango (Ac), Fuego (F), Atitlan (At), Zunil (Z), San Pedro (Sp), and Toliman (T).

Some strato volcanoes are just a collection of domes piled up on each other. Strato volcanoes are commonly found along subduction-related volcanic arcs, and the magma supply rates to strato volcanoes are lower. This is the cause of the cooler and differentiated magma compositions and the reason for the usually long repose periods between eruptions. Examples of strato volcanoes include Mt. St. Helens, Mt. Rainier, Pinatubo, Mt. Fuji, Merapi, Galeras, Cotopaxi, and super plenty others. 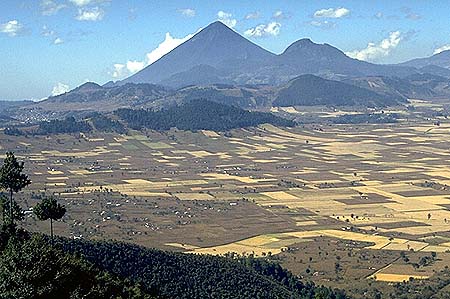 Right:  Here is a classically-formed strato volcano called Santa Maria, in Guatemala. Santa Maria had a huge eruption in 1902, from a vent on the other side of the cone as viewed from this direction. The big 1902 eruption was not from the summit. Starting in 1929, a lava dome began to grow in the 1902 crater, and it is still active today. It is named Santiaguito. The relatively large city of Quetzaltenango is out of view to the right. 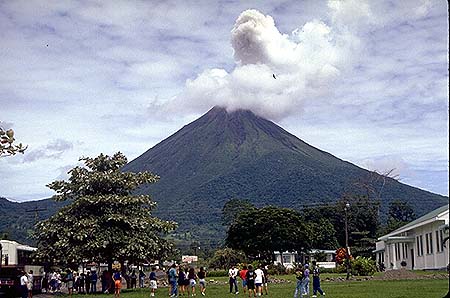 Left:  This is Arenal volcano, in Costa Rica. It is almost perpetually erupting at a relatively low rate. You can sort of get a sense for how small most strato volcanoes are - you could easily hike around the base of Arenal in a day. As you can see there are people living very near to this active volcano. Fortunately, at the moment most of the lava flows and small pyroclastic flows are going down the other side of the volcano, not the side with this town.

Another very common and deadly hazard at most strato volcanoes is called a Lahar.  Lahar is an Indonesian word for a mudflow, and most geologists use the term to mean a mudflow on an active volcano. Sometimes the word is reserved only for mudflows that are directly associated with an ongoing eruption (which are therefore usually hot), but that starts to make things confusing. It is probably simplest to just call any mudflow on a volcano a lahar. Lahars are so dangerous because they move quickly, and often times a small eruption or relatively small rainstorm can generate a huge lahar. The most recent huge volcanic disaster occurred at a Colombian volcano called Nevado del Ruiz in 1985. This disaster has been well-documented by numerous post-eruption studies. Nevado del Ruiz is a very tall volcano, and even though it lies only slightly above the equator it has a permanent snow and ice field on its summit. On November 13, 1985 a relatively small eruption occurred at the summit. Even though only a little bit of ash fell and only small pyroclastic flows were produced, they were able to melt and destabilize a good deal of the summit ice cap. The ice cap had already been weakened and fractured by a few months of pre-cursor seismic activity. The melted snow and ice, along with chunks of ice, surged down gullies that started high on the slopes, picking up water, water-saturated sediments, rocks, and vegetation along the way. The eruption occurred just after 9:00 pm, and about 2 and a half hours later lahars managed to travel the approximately 50 km down river valleys to the town of Armero. The lahar entered Armero at 11:30 pm as a wall of muddy water nearly 40 meters high, and roared into the city, producing an eventual thickness of 2-5 meters of mud. Somewhere around 23,000 people were almost instantly killed. The path of destruction almost exactly matches similar disasters that occurred in 1595 and 1845.