Semeru, the highest volcano on Java, and one of its most active, lies at the southern end of a volcanic massif extending north to the Tengger caldera. The steep-sided volcano, also referred to as Mahameru (Great Mountain), rises abruptly to 3676 m above coastal plains to the south. Gunung Semeru was constructed south of the overlapping Ajek-ajek and Jambangan calderas. A line of lake-filled maars was constructed along a N-S trend cutting through the summit, and cinder cones and lava domes occupy the eastern and NE flanks. Summit topography is complicated by the shifting of craters from NW to SE. Frequent 19th and 20th century eruptions were dominated by small-to-moderate explosions from the summit crater, with occasional lava flows and larger explosive eruptions accompanied by pyroclastic flows that have reached the lower flanks of the volcano. Semeru has been in almost continuous eruption since 1967. More than 500 people have been killed by Semeru's eruptions during the last 30 years. 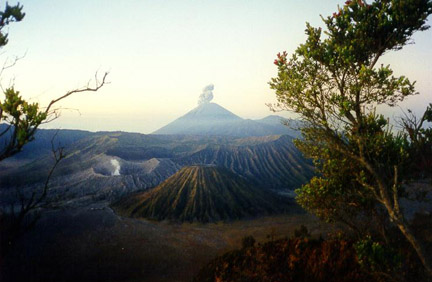 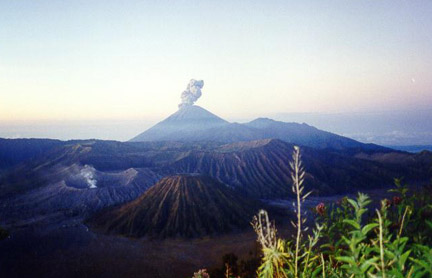 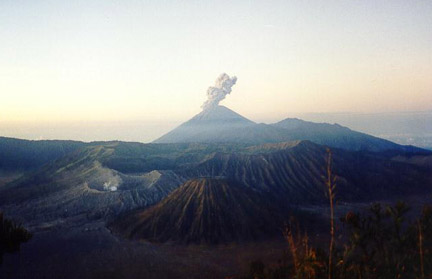 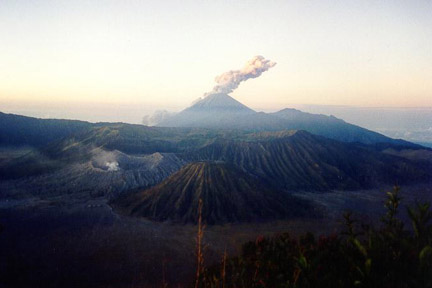 Semeru is one of many volcanoes in the area
Graphic courtesy of Darwin VAAC.

The eruptions are commonly moderate to moderately large (VEI=2-3) and some of the eruptions produced pyroclastic flows and/or lava flows. Ten of these eruptions have been fatal. Mudflows and secondary mudflows have been the most dangerous, killing nearly 600 people during the 1909 and 1981 eruptions. The most recent eruption of Semeru began in 1967 and has continued to the present. Vulcanian-type eruptions are common at Semeru and the generated pyroclastic flows, lava flows, and domes. Nearly 500 people have been killed by the current eruption. In August of 1994, explosions were occurring at intervals of 15-20 minutes. In February of 1995, pyroclastic avalanches travelled up to 0.6 mile (1 km) from the summit. 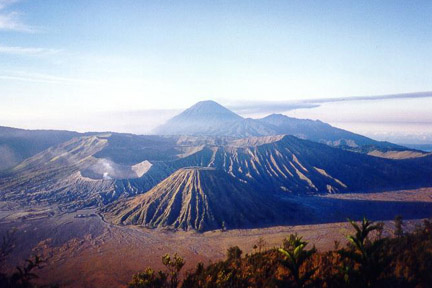 A dispersed ash plume from the above eruption lingers around the mountain. 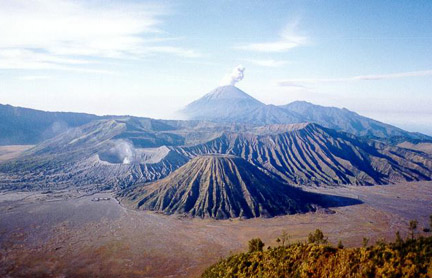 Another view across the caldera to Semeru.