Santa Ana, El Salvador's highest volcano, is a massive, 2381-m-high andesitic-to-basaltic stratovolcano that rises immediately west of Coatepeque caldera. The summit is truncated by a series of four nested craters, seen here from the SW. A series of parasitic vents and cones have formed along a 20-km-long fissure system that extends from the low NNE flank to the San Marcelino and Cerro Chino cinder cones on the SE flank. Historical eruptions, largely consisting of small-to-moderate explosions from both summit and flank vents, have been recorded since the 16th century. 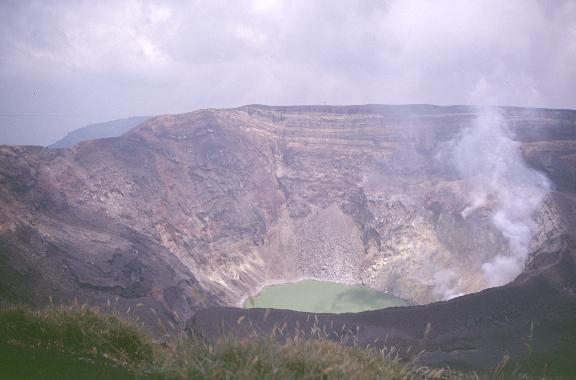 View of the southern crater wall. Photo by Carlos Pullinger, May 1997.

The collapse of the volcano during the late Pleistocene produced a voluminous debris avalanche that swept into the Pacific Ocean, forming the Acajutla Peninsula. Reconstruction of the volcano subsequently filled most of the collapse scarp. The broad summit of the volcano is cut by several crescentic craters, and a series of parasitic vents and cones have formed along a 20-km-long fissure system that extends from near the town of Chalchuapa NNW of the volcano to the San Marcelino and Cerro la Olla cinder cones on the SE flank. Historical activity, largely consisting of small-to-moderate explosive eruptions from both summit and flank vents, has been documented since the 16th century. The San Marcelino cinder cone on the SE flank produced a lava flow in 1722 that traveled 13 km to the east. The first historic eruption of Santa Ana was in 1520.

Topographic map of the surrounding area.

Edifice (from Michigan Tech's Volcanoes Page):
A NW-SE fault system dissects the crater forming a graben-like structure in it. This fault trend extends nortwest to the town of Chalchuapa (approximately 15 km away)and along these faults several cinder cones, explosion craters and lava flows have been formed. Southeast of the Santa Ana volcano, Izalco, Cerro Verde and several minor eruptive centers lie on an extension of the NW-SE fault system.

Directly east of the Santa Ana volcano, starting from an alevation of approximately 1500 m, a very steep subcircular escarpment forms the walls of the Coatepeque collapse caldera. West of the crater the morphology of volcano suggests the existence of an edifice collapse scar, that is believed to have produced an avalanche debris that covered approximately 200 km2 and formed the Acajutla peninsula to the south.