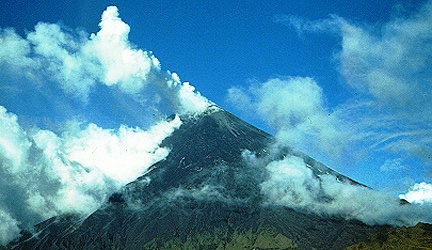 Sangay has been erupting virtually continuously since at least 1934. Eruptions are Strombolian in character. Mild explosions frequently emit ash. In August of 1976, an expedition was caught near the summit during an explosion that dropped blocks up to 14 inches (35 cm) in diameter on the group. Two people later died from their injuries. The first documented eruption of Sangay was in 1628. Photograph by G.E. Lewis, 1946. Courtesy of U.S. Geological Survey.

Satellite imagery on January 27 showed a narrow ash plume at a height of ~6 km a.s.l. that drifted SW 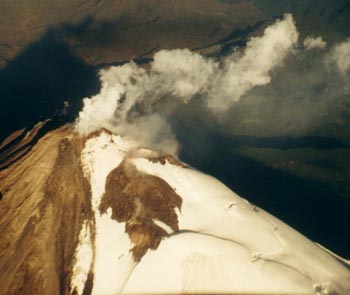 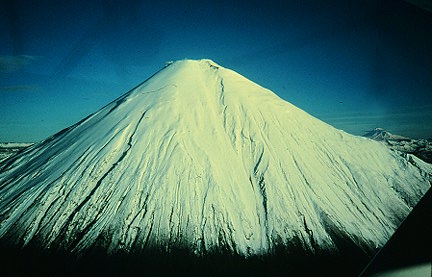 Sangay is the southern most stratovolcano in the northern volcanic zone of the Andes. Volcanism in the northern volcanic zone is the result of subduction of the Nazca Plate beneath the South American Plate. South of Sangay the angle of subduction is too shallow to generate magma. These relationships highlight the critical role of the asthenosphere in producing magma for the volcanic arc volcanoes. Photo by Pete Hall. 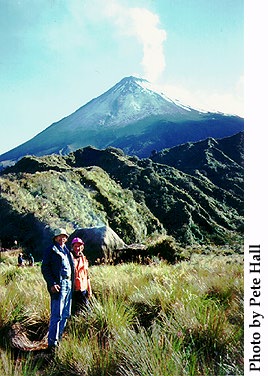 Pete and Patty Hall at Sangay.

The biggest highlight of the year was a 2.5 week trip to Sangay Volcano, which we undertook beginning in late November. Sangay is a very majestic stratovolcano (5200m) (17,100') in the Eastern Cordillera, located about 40 km northwest of the town of Macas. There are no roads or horse trails near to it, so getting to the base of the cone requires 2-3 days of strenuous hiking. Once there, camping o n the pyroclastic apron at elevations of 3600-4000m one could hear and see frequent explosions being generated from a central crater on the summit of the volcano. The sounds generated are reminiscent of the combined force of several jet but can also soun d like heavy surf or strong exhalations. The explosions were all phreatic and occur when the conduit to the surface becomes blocked by debris, stopping the free flow of gases and heat, causing an increase in pressure until the buildup is great enough and the plug is blown out. These explosive event s occurred irregularly, at 30 minute to 8 hour intervals. A portable seismograph recorded the activity for the duration of our stay. Most notable are the distinctive high amplitude, high frequency seismic signatures created by the explosions, less so i s the presence of tremor.

Our trip to Sangay was part of a cooperative program that the Institute has with the French scientific mission (ORSTOM), and two volcanologists of this group headed up the team. Our main mission was to make a reconnaissance geologic map of the volcano, d etermine its long and short term eruptive history and to record the seismic activity with the idea that in the future we might be able to install a telemetered seismic instrument on the West side of the cone. We were able to accomplish all our goals; a c ouple years from now a report will be published on our findings.

Besides admiring the splendor of the volcano and the tremendous views we had over the Amazon Basin, we also had encounters with rare forms of plants and animals. Most notable perhaps were the "Matefanga" plants which have kingsize umbrella leaves and cre ate dense grooves, which are the favored habitat of the mountain tapir (danta) - - a 400 pound hippo-like herbivore which lives on the cloudy east slope of the Andes, and is in danger of extinction. The trails of the danta were virtually everywhere and p roved invaluable for the ease of movement. 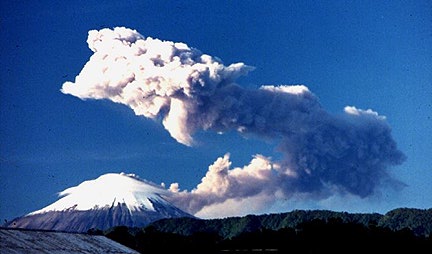