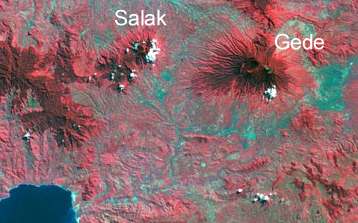 Salak is a stratovolcano with at least five eruptions between 1780 and 1938. Salak may have erupted in 1699 but the eruption has not been confirmed. All of Salak's eruptions have been at flank vents and most have been phreatic. Eruptions have been moderate in size (VEI=2). Image courtesy of the Landsat Pathfinder Project.

Gede is a stratovolcano with at least 21 eruptions between 1747 and 1957. Eruptions have been moderate to moderate-large in size (VEI=2-3). The eruption in 1840 was the largest and generated pyroclastic flows. The 1947-1948 and 1955 eruptions were phreatic. The 1840 and 1852 eruptions caused damage but no fatalities. Image courtesy of the Landsat Pathfinder Project.