The Earth was formed about 4.6 billion years ago. The planet was so hot that the entire Earth was molten or liquid. As the Earth cooled, the lightest materials floated to the top and the heaviest materials sank to the center. The outer part of the Earth, the crust, consists of the lightest rock. 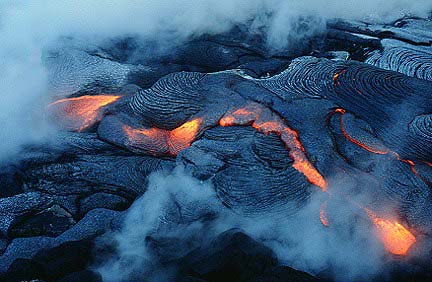 The granitic continents ride on a much denser rock called basalt. These basalts form the bottom of our continents and the bottoms of our great oceans. This layer of rock extends down to 40 miles from the surface of the earth.

Rocks are made of two or more different minerals that have been:

2. squeezed and heated together, or

3. melted and cooled together. Look at the photo above of granite. Notice the different mineral crystals that make up the rock, granite.

Most of the Earth's surface rocks are covered by soil or clay. Soil contains very small crushed pieces of rock and organic (plant and animal remains) material. Plants such as grass and trees grow in this region of the crust. 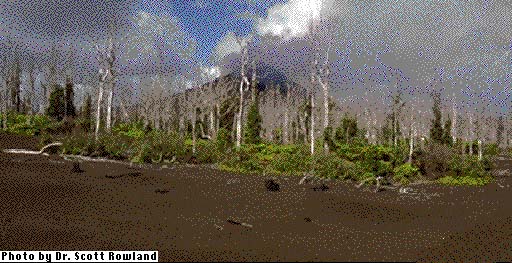 The photo above shows a recent eruption of ash that has covered and burned an area of dense vegetation in Hawaii. The lava has cooled and is now a volcanic rock called basalt. The weathering process will break the basalt down into small, finer pieces of rock called soil. This process can take a few years or thousands of years to produce soil fine enough for plants to grow well in. The soil will become fertile when bacteria decomposes plant and animal material adding nutrients for living plants.

Rocks are produced in a variety of ways and have been cycled in some area many times. This cycling of the rocks is called the rock cycle. 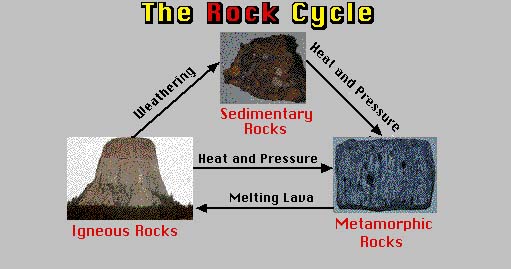 The rock cycle shows how the earth's rocks are changed again and again. The rocks can be changed at times to another type of rock. The rock cycle can begin anywhere in the cycle. Lets start with igneous rocks. Igneous rocks start as magma. The magma (molten rock under the surface) and lava (molten rock on the surface) hardens into igneous rock. The igneous rock then breaks apart over time through the process of weathering. These bits of broken rock are washed away by rains and deposited in a river. These pieces of igneous rocks are cemented together with other bits of rock and form a sedimentary rock called conglomerate. Over time sedimentary rocks can be buried by earthquakes or other geologic processes. Being buried deep under the surface in areas of high temperatures and pressures or coming in contact with magma can cause these sedimentary rocks to change to metamorphic rocks.

Diagram 1 shows layers of rocks around and under a volcano. The white blocks are a sedimentary rock called limestone. Limestone forms on the bottom of the ocean over many, many years. The fish and shelled sea animals decompose and their bones and shells break down into a chemical called calcium carbonate (CaCO3). This is the cementing agent that binds the sediments that fall to the sea floor into the rock called limestone. Magma has pushed its way to the surface and is now coming into contact with the surrounding rock layers.

Diagram 2 shows the limestone being heated by the magma and changing to the metamorphic rock called marble (Yellow). Marble is a beautiful rock that is used by humans as building material and for decorative uses as in sink tops or monuments. Artists have sculpted marble into some of the greatest works of art in the world. 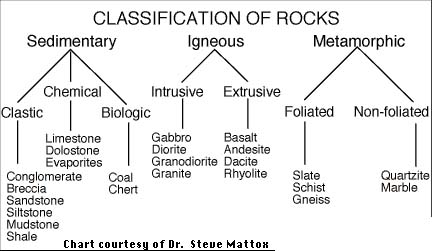 The three main rock classifications are Igneous, Sedimentary, and Metamorphic. Rocks are classified into these groups by the way they were formed. 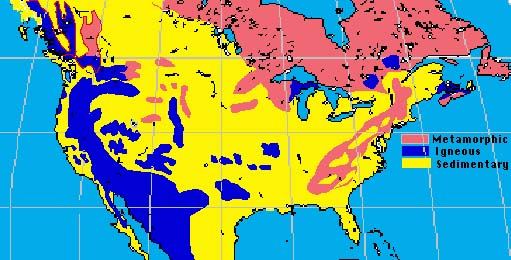 This map of the United States and parts of Mexico and Canada shows what type of rock makes up the surface of these regions. The majority of the surface rocks on the North American continent are sedimentary. The mountainous regions of the west and southwest are made of igneous rocks. The Appalachian Mountain region of the eastern U.S. and most of eastern Canada are made of metamorphic rocks. 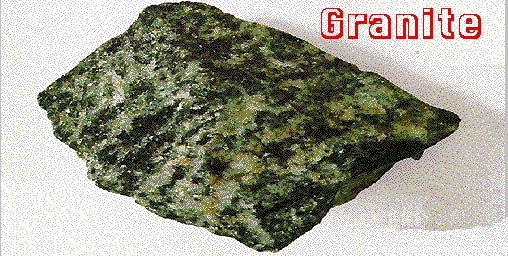 Granite is quarried in many places in the world including the United States. The state of New Hampshire has the nickname "Granite State" because of the amount of granite in the mountains of that beautiful state. The Canadian Shield of North America contains huge outcroppings (surface rocks) of granite. 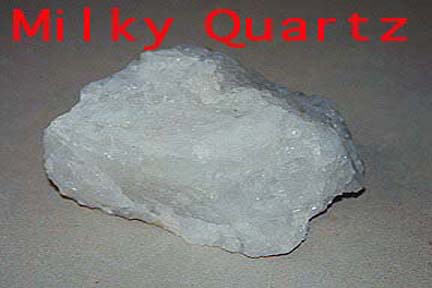 Milky quartz is a common mineral that is found in many different types of rocks. The chemical formula is Silicon oxide (SiO2). One type of quartz is easily identified by its hexagonal crystals, but quartz can also be found in a large mass. Quartz can be broken or weathered into the tiny pieces we know as sand. Quartz is a very hard mineral and in fact is the hardest of the common minerals. Quartz is number seven on the Mohs hardness scale. Quartz is also chemically stable, which means that it weathers very slowly.

Quartz is used by humans in producing optical instruments and electical devices. It is also used to make sandpaper and grinding tools. 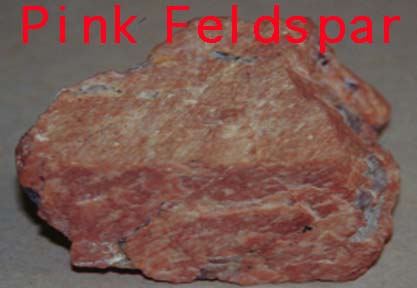 Feldspar is the most abundant mineral in rocks that are located at or near the earth's surface. Feldspar can have a glassy white, blue, green, or red crystals. All feldspars contain silica and aluminum. 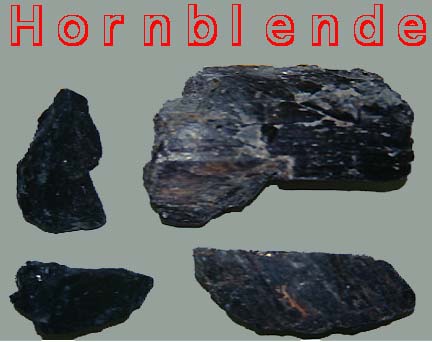 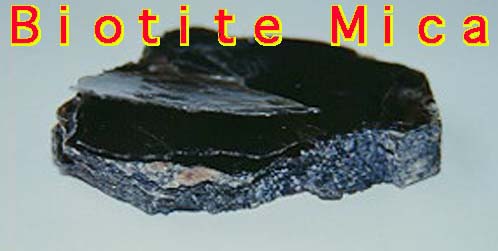 Mica is a mineral that can be split into very thin sheets. These sheets can be so thin that 1000 can be layered into mica 1 inch high. Mica can be clear, black, green, red, yellow, and brown. Clear mica is called Muscovite because it is found near Moscow, Russia and was used as window glass in the Muscovite's homes. Muscovite contains water which helps to make it clear. Biotite mica is dark green to black in color because it contains iron, magnesium.

In your own words write a definition for rock.

What is soil composed of?

Describe in your own words how the rock cycle works.

Name the three classifications for rocks.