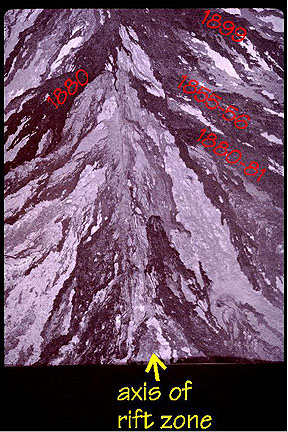 Radiating away from the summits of Hawaiian volcanoes are (usually two) linear rift zones. The rift zones conspicuously do not point towards adjacent volcanoes, but instead parallel the volcano-volcano boundaries. Rift zones mark preferred directions of sub-horizontal magma excursions from the magma chamber. Below is a map of the main Hawaiian islands showing rift zones in red lines and volcanic centers as red squares. Note that the rift zones tend to parallel the volcano boundaries, and avoid pointing at each other (from Fiske & Jackson 1972).

At the surface they are characterized by numerous vents, fissures, earth cracks, cinder cones, graben, pit craters, and the sources of lava flows. All of these are indications that magma preferentially intrudes into the rift zones and is also often stored there for periods of time up to a few years.

The vertical air photo on the left shows of a section of the NE rift zone of Mauna Loa. Even without the arrow it is pretty easy to figure out where the axis of the rift zone is. The red numbers give the dates of the flows (from Macdonald & Abbot 1970).

There has been much discussion about the formation and persistence of Hawaiian rift zones (e.g. Fiske & Jackson 1972; Deterich 1988). The general idea is that because Hawaiian volcanoes are close to one another relative to their size, a younger volcano is growing through the flank of an older one. The gravitational stress field caused by the pre-existing volcano tends to yield downslope-directed directions of least compressive stresses. Because dikes orient themselves so that their direction of widening is parallel to this least compressive stress, the dikes end up propagating parallel to the volcano-volcano boundary. Once a preferred direction of dike propagation is established, it is self-perpetuating as long as there is a mechanism for the flanks of a volcano to move outward to accommodate the repeated dike injections.

On the right is a schematic representation of Kilauea (purple) growing on the flank of Mauna Loa (green). Note how Kilauea has been affected by the shape (and hence the stress orientation) of its huge neighbor, and has adopted the same rift zone orientation (from Fiske & Jackson 1972).

The most popular mechanism for this outward movement is sliding along the volcano-ocean floor interface which consists of easily-deformable sediments (e.g. Nakamura 1982). The focal mechanism for the 1975 M7.2 Kalapana earthquake indicated a slip plane that was nearly horizontal with a slight dip towards at a depth consistent with the base of the volcano (e.g. Lipman et al. 1985). Such an orientation would be expected due to the downward warping of the oceanic lithosphere under the load of the island.

Above is a schematic cross-section through Kilauea and part of Mauna Loa, viewed towards the East. This shows how the seaward flank of Kilauea (and part of Mauna Loa) is pushed southward (to the right) by the intrusion of dikes down the rift zone (away from you into the plane of the diagram). This huge bulk of volcano is probably sliding on ocean sediments that accumulated on the ocean floor during the 90 million or so years between the time that our particular part of Pacific Plate formed and when the Big Island of Hawai'i started to grow. 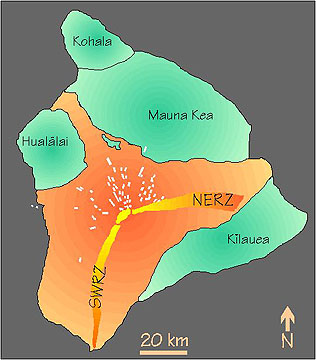 Rift zones probably become preferred directions of dike propagation due to stress orientations, and they evolve thermally to perpetuate themselves. This means that eruptions are rare elsewhere on the flanks of the shields. Except at the summit, the vents of Kilauea are found exclusively along the rift zones. On Mauna Loa, however, there is a class of vents called "radial vents " (Lockwood & Lipman 1987) that are found on the northern and western flanks. This is the sector on the obtuse side of the angle formed by the two rift zones, and circumferential tension caused by a bending moment set up by the rift zones and the westward push of neighboring may be leading to the formation of these vents (Walker 1990).

To the left is a map of the big island with Mauna Loa in orange. The short white lines are the "radial rifts" that do not fall into either of the rift zones (NERZ and SWRZ). Note that one of these radial rifts erupted through the flank of Mauna Kea, and that another erupted offshore (in 1877). Adapted from Lockwood & Lipman 1987.

Probably the most studied rift zone is the east rift of Kilauea. The northern flank of this rift is stable, probably because it abuts Mauna Loa. The south flank, however, is notably mobile. It has been shown to move seaward during both earthquakes and intrusive events. There is nothing in this direction to buttress the flank so the continued pressure caused by numerous dike intrusions produces this seaward displacement (Swanson et al. 1976; Lipman et al. 1985). This relative displacement between the non-mobile north flank and mobile south flank has caused a wide graben to form along the crest of the rift. Thus even though the rift axis is the locus of most eruptive activity it is in places topographically subdued. Some of the faults bounding this graben are visible near Napau crater. 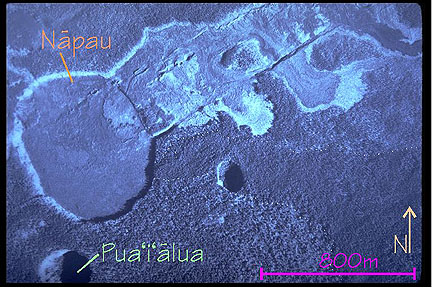 Vertical air photo of Napau pit crater along the East rift zone of Kilauea. Napau has been almost filled by recent lavas (here making it look smooth relative to the surrounding forest). Note that vents, faults, fissures, and smaller pit craters are all aligned from the lower left (uprift) to upper right (downrift). The actual rift zone is wider than this photo (from Carr & Greeley 1980). Note also that differences in vegetation make flow margins traceable - the dotted white lines outline an old flow that appears to have had a source that is now engulfed into Napau crater.