Geologists use "life" as a way of measuring how old layers of the Earth are. "Life" means plants, animals, bacteria, fungi, and monerans that were once alive but are now fossils found in rock. Fossils are the remains of plants and animals that have been preserved in rock. Fossils are usually a skeleton, shell, or plant fiber that has been buried and turned into rock over time. Fossils can also be tracks and traces of these animals, or in some rare cases, the actual plant or animal can be preserved, such as an insect preserved in amber.

The photo above shows a trilobite fossil preserved in rock.

The first life appeared about 3.2 billion years ago in the form of algae, a simple single celled plant. Scientists know that life on Earth has changed over time and that the life has become increasingly more complex. Scientists also know that these changes didn't occur over night, sometimes it took millions of years for these plants and animals to evolve.

Scientists use two major types of events to break up the Earth's history. These events are biological changes and physical changes.

Scientists have used their knowledge of rocks and fossils to separate the history of the Earth into four major eras or periods of time. During each of the eras, great biological or physical events took place that led to important changes in life on Earth. Some of those plant and animal changes are noted in the chart above.

A biological change means that new forms of life were formed, such as fish evolving into amphibians. Physical changes were changes in non-living things such as mountain building, volcanism, or climate changes.

When the Earth was a newly formed planet, it was so hot that it was no more than a molten spinning ball. No life could could survive the great temperatures. It took at least 1.5 billion years for the Earth to cool enough for life to evolve. The first life that we have found fossil evidence of are simple plants called algae. Scientists believe that bacteria, viruses, fungi, and simple worms were also among the first life forms. This period of time that we have found these earliest fossils is called Precambrian time. Precambrian time started at the birth of the planet Earth and lasted until around 600 million years ago. Very little is known of the climate of the earky Precambrian time. This was a time of great volcanic activity and mountain building. The last part of the Precambrian was also a time of volcanism but the Earth was driven into a very cold glacial age.

Precambrian time is by far the longest period, covering at least 4 billion years, which is almost 90% of our planet's history. Very few fossils, which represent life though, have been found from this very long period. This absence of life is a result of these old Precambrian rocks being subjected to mountain building and metamorphism, which has led to the destruction of most of the fossils from this era.

The Paleozoic Era is the second oldest era of our Earth's history. Paleozoic means "Ancient Life" and lasted 345 million years. This is the first era in which scientists have found numerous fossils. It began about 600 million years ago with the first trilobites, a small, shelled sea creature resembling a modern crab. The Paleozoic is called the "Age of Fish". Fish are the ancestors of all vertebrates, which includes the human race.

The continents were all connected into one huge landmass called Pangaea during the early Paleozoic. Pangaea was a very cold place being located near the South Pole. The only life on the planet was living in the seas surrounding the super continent in the form of simple plants and very simple animals called invertebrates. Invertebrates are animals that have no backbone. The first vertebrates, animals with backbones, were fish. Fish came on the scene about 500 million years ago.

Pangaea then started drifting northward and became much warmer which led to the rise of land plants and animals. The ocean also rose as the climate warmed melting the glacial ice. The first land plants arose from the water about 440 MYA (Million Years Ago), and the first amphibians about 400 MYA. This era also produced the first reptiles around 305 MYA. The end of the Paleozoic Age was marked by a physical change and a biological change. The Appalachian Mountains were formed in the eastern United States and the trilobites died out. We believe the trilobites died out about 225 million years ago.

Mesozoic means "Middle Life" and began about 225 million years ago and ended about 70 million years ago. This era is called the "Age of the Reptiles". The era started with the rise of the dinosaurs. The word dinosaur means "Terrible Lizard". These reptiles ruled Pangaea as the seven continents began to move apart. The ocean was still very high and the climate was still very warm. The first birds were evolved during the mesozoic. Some paleontologists believe that birds evolved from a dinosaur called the raptor. The end of the Mesozoic was marked by two great events, the rise of the Rocky Mountains and the extinction of the dinosaurs. When one group ends its dominance another will take its place. The next group to become dominant over the world were the mammals.

The Cenozic Era is also called the "Age of the Mammals". It began about 65 million years ago as the great lizards, the dinosaurs became extinct. This led to a rise in the mammal population.

There are numerous theories as to why the great dinosaurs became extinct. One thing we know about the early Cenozoic is that the climate became much cooler and drier. Dinosaurs are reptiles which means that they need the air to be warm for them to increase their energy level. Reptiles are cold blooded. Mammals on the other hand are warm blooded, which means that they can increase their energy levels within their own bodies. They do not have to rely on the sun's warmth to provide energy for movement.

This set of circumstances was present in North America during the Paleozoic Era. 345 million years ago great swamps covered the eastern United States. These swamps led to the great coal deposits of Pennsylvania and West Virginia. 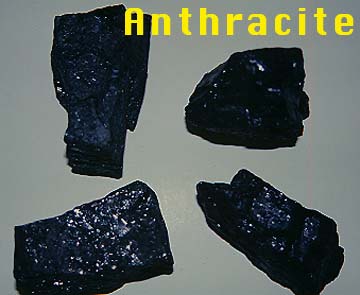 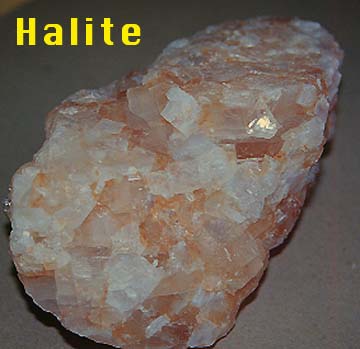 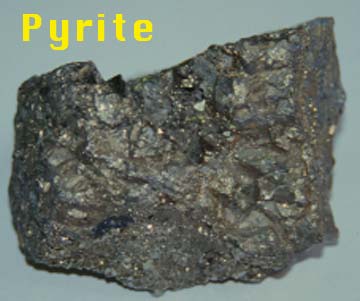 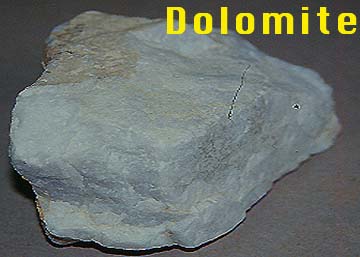 Dolomite is both a mineral and a rock. Dolomite is a calcium-magnesium carbonate. It is very similar to calcite and limestone in its chemical make up. Dolomite is white or light pink in color. It has a hardness of 3.5-4 and only will react to acid when it is heated.

Dolomite is used as a building stone and as a source of magnesium. 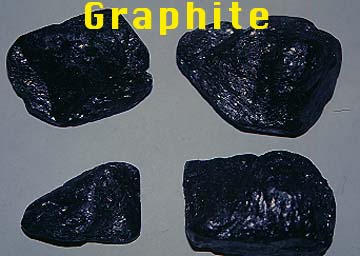 The mineral above is very similar chemically to a diamond. Graphite and diamond are both pure carbon. The difference is the amount of heat and pressure that has been put onto the two minerals. Diamond is the hardest natural element on Earth with a hardness of 10 which is the maximum on the Mohs hardness scale. Graphite is a very soft mineral with a hardness between 1 and 2. Graphite has a black streak and was probably formed by the metamorphism of plant remains or by the crystallization of ancient magmas. 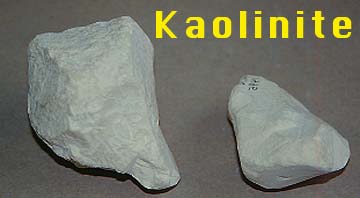 Kaolinite is a clay mineral which is formed by the weathering of feldspar. It is one of the most common minerals on Earth. Kaolinite can be found in all parts of the Earth. It is very soft with a hardness of 2-2.5 and color of white, pink or grey and a steak of white. The chemical make up is Al2 Si2 O5 (OH)4.

Write the answers to the following questions in complete sentences on a piece of paper. Use the buttons located directly under the questions to navigate your way through the lesson to locate the answers. When you have finished the lesson click on the Earth icon so the next group can begin the lesson.

1. Name the four eras of geologic time from the oldest era to the present era

2. What is an index fossil?

3. What two types of changes led to the end of geologic eras?

4. Describe the process involved in the formation of coal.