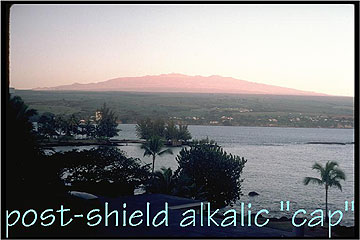 As the volcano moves off the hotspot, the amount and degree of partial melting both become lower. The lower degree of partial melting leads to a return to alkalic lava production, and the next stage in a Hawaiian volcano's life is called the post-shield alkalic stage, characterized by a greatly reduced eruption rate. A result of this reduced eruption rate is a much longer period of time between resurfacing at any one place on the volcano, so that erosion and weathering can be extensive.

The lower magma production rate during the post-shield alkalic stage decreases the thermal efficiency of the plumbing system and eventually the main magma chamber solidifies due to the lack of replenishment. This lack of a shallow magma chamber has a great effect on the nature of eruptions during the post-shield alkalic stage. Without the shallow magma chamber to rest in, only large batches of magma are able to make it to the surface, and they have to make the trip from the source region to the surface quickly to avoid solidifying along the way. This means that their xenoliths and large crystals don't have a chance to settle out, nor does gas have a chance to escape. 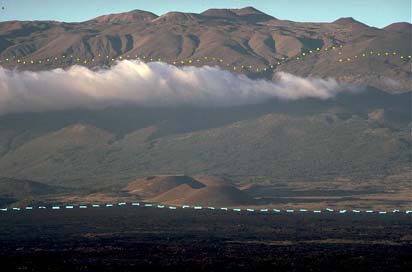 The consequences of all this are that post-shield alkalic stage eruptions usually consist of large volumes of cooler, gas-rich, xenolith-rich lava, but they are infrequent. The greater gas content means higher fountains and consequently larger cinder cones such as on Mauna Kea (right). Alkalic lava theoretically has a lower viscosity due to its lower silica contents. However, because during this stage the lavas also tend to be cooler, the viscosity increase due to this lower temperature usually outweighs the viscosity decrease due to the lower silica. Post-shield alkalic activity tends to be more concentrated at the summits than during the main shield activity.

This combination of lots of big cinder cones and lots of thicker viscous flows all concentrated near the summits causes Hawaiian volcanoes in this alkalic stage to be noticeably steeper and bumpier than in the tholeiite stage (see below). Mauna Kea and Hualalai are in this stage of development. Hualalai last erupted in 1800 and 1801, and Mauna Kea about 3600 years ago.

The air photo below, aiming towards the SW, shows Mauna Loa, Mauna Kea, and Hualalai. Note that Mauna Loa (ML), which is in its tholeiite shield stage, has a more gradual and smooth profile compared to Mauna Kea (MK) and Hualalai (H), both of which are in their post-shield alkalic stages. 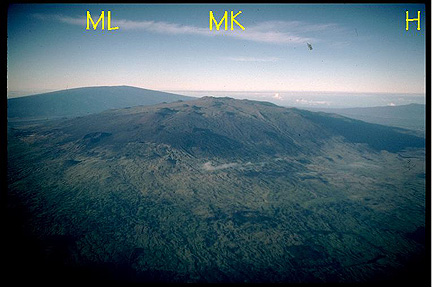