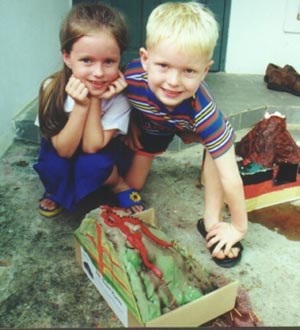 We took a small cardboard box (18"x18"X4") and glued a paper towel dowel to the back of the box. The dowel has a beveled cut to help the flow go in the right direction. We cut it to be about 10" tall.

After this, the children rolled up scrap sheets of paper that we had saved from the computer for them to draw on. We started with big wads of paper and built a good base by using ordinary school glue to keep the pieces stuck together. Then we filled in with little wads until we had formed a half mountain coming down the dowel.

Our mom made the play dough recipe (below) separating a small amount with red dye and a larger amount with green dye. When the larger amount had cooled somewhat, we rolled it out into a fairly thin sheet (not too thin) and draped it over the paper wads until the entire semi-volcano was covered. We had to patch some places. It give a great rough mountainous surface.

We then spray painted some brown paint lightly over the green play dough. When this dried, we made small green trees out of the remaining play dough. With the red play dough we made lava flows going down the "crater."

At school, we filled the dowel with baking soda. We had put a mix of green and red food coloring in the vinegar and poured it into the tube.