The Pastos Grandes Caldera, measuring roughly 60km N-S and 30km E-W, is the source of 2 known ignimbrite-forming eruptions.  The first eruption occured approximatley 5.45 million years ago, erupting the Chuhuilla Ignimbrite.  The second eruption occured approximately 2.89 million years ago, erupting the Pastos Grandes Ignimbrite.  The ignimbrites account for 1200 km3 and 1500 km3 total volumes respectively.  A third ignimbrite, the Alota ignimbite, was erupted from the Cerro Juvina ignimbrite shield to the northeast of the caldera.  The goals for this field season were to map the relationship between the ignimbrite and the eastern scarp (outlined in orange) of the caldera (1), determine the relationship between the ignimbrites and Cerro Chuhuilla, a large dome on the northeastern scarp (2), collect samples from the post resurgent domes inside the caldera (3), map the resurgent dome (4), and become familiar with the intracaldera vs outflow facies of the 2 ignimbrites (5).  The overall goal of the field work is to map the caldera in detail to identify eruptions of all scales sourced from the complex. 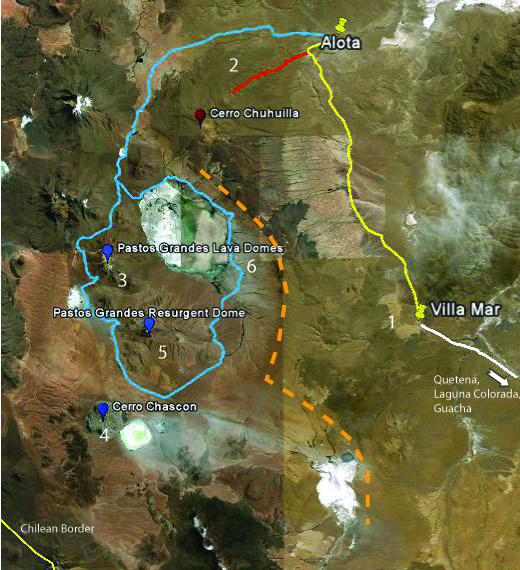 The major features of the Pastos Grandes caldera system are highlighted above.  The eastern extent of the caldera is traced in orange and the routes through the area are traced in blue (Pastos Grandes Caldera Loop), yellow (Alota/Villa Mar Road), and red (Cerro Chuhuilla Road). Note that in many cases the roads had to be left behind to forge new paths. for a more Numbers denote the location of the each of the stops. 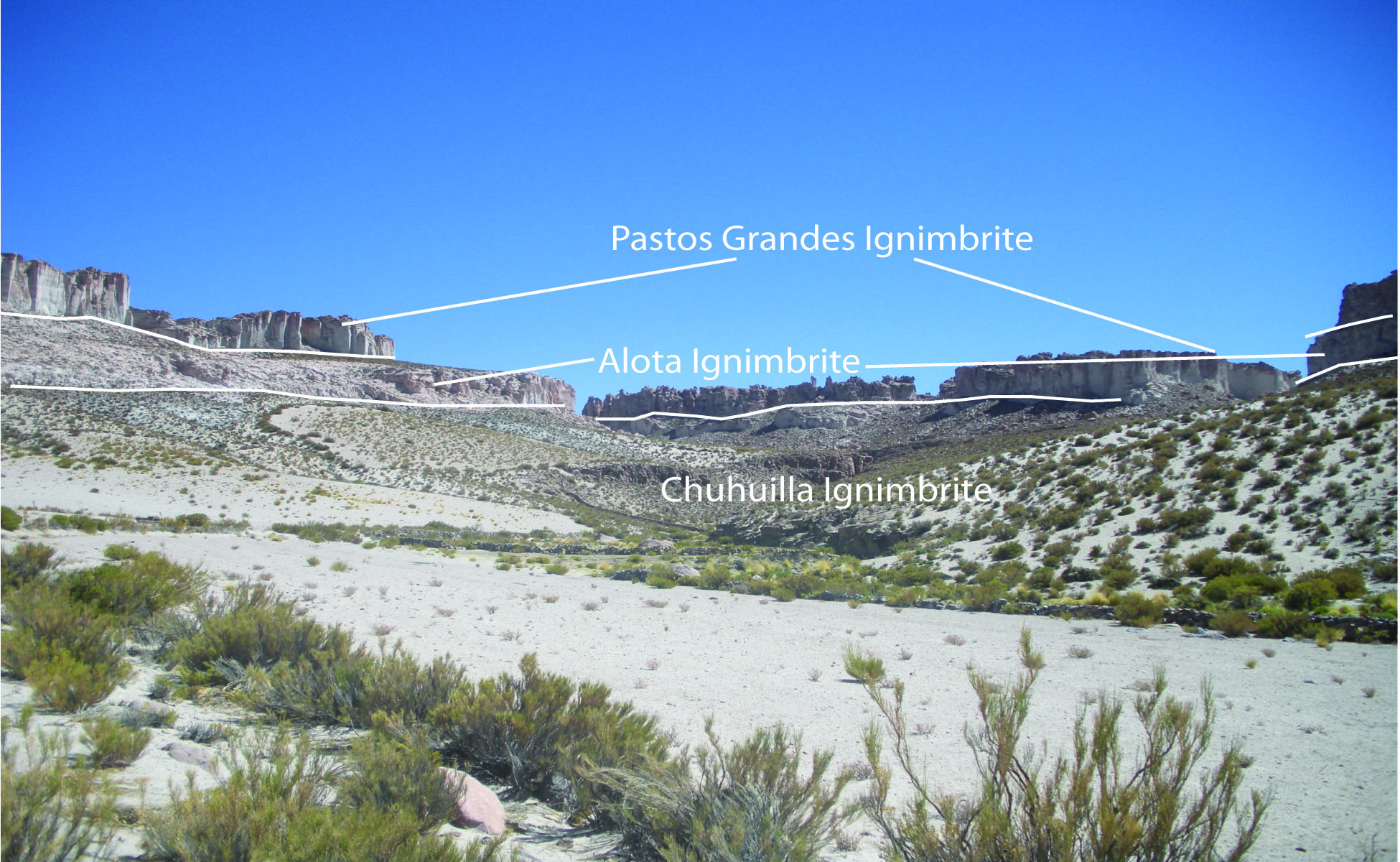 A view of the outflow facies of the Pastos Grandes Ignimbrite (top) and the Chuhuilla Ignimbrite (bottom) with the Alota Ignimbrite, erupted from nearby Cerro Juvina at 5.23 Ma, in between.  This stratigraphic sequence is common on the northeastern flanks of the caldera. 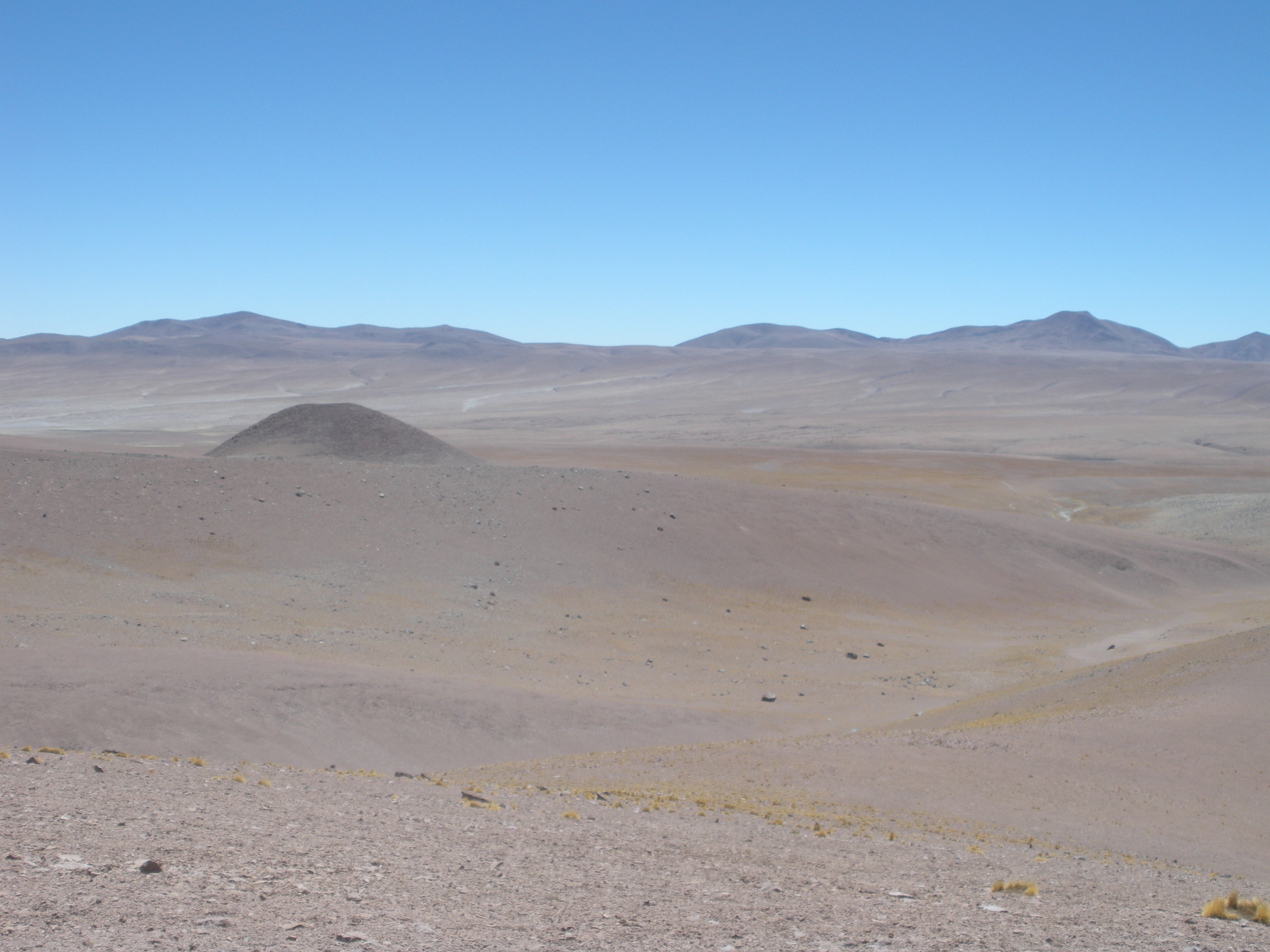 A view northeast from the resurgent dome to the eastern scarp of the caldera.  The distance is nearly 17.5km covering the entire width of the eastern moat.  Intracaldera Pastos Grandes Ignimbrite covers the base of the scarp in the distance.