The Volcano World team was at it again in 2010.  Lead by Dr. Shan de Silva, a new team of graduate students headed out to the Altiplano-Puna Volcanic Complex.  This year the focus was on the Pastos Grandes caldera, Laguna Colorada ignimbrite shield, and the Guacha caldera in southwestern Bolivia.  The map below shows a general view of the route that we took during the field season that spanned roughly 6 weeks in October and November of 2010.  We started in La Paz, the capital of Bolivia and travelled South to Uyuni, on the banks of the Salar de Uyuni.  From Uyuni our trip took us to the small towns and villages of Alota, Villa Mar, Quetena, and Huayajara.  There were "roads" between many of the towns that accomodate many of the tourists to the region, but many times we found ourselves forging new paths in each of the complexes.  Click on the links to the right to see detailed maps of each of the field areas as well as photos of some of the great volcanic features of the area. 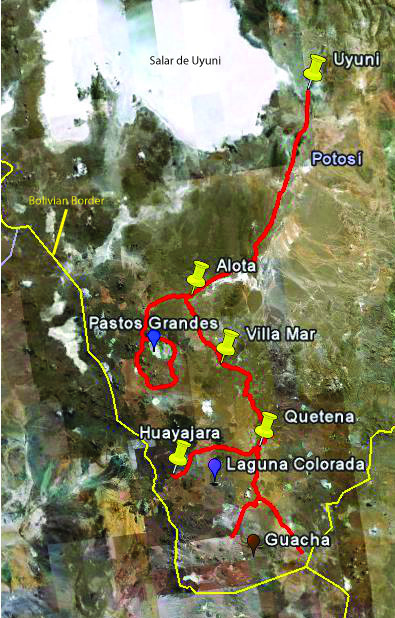 The red line is the major route that was taken, though smaller roads are shown in each of the field pages to the right.