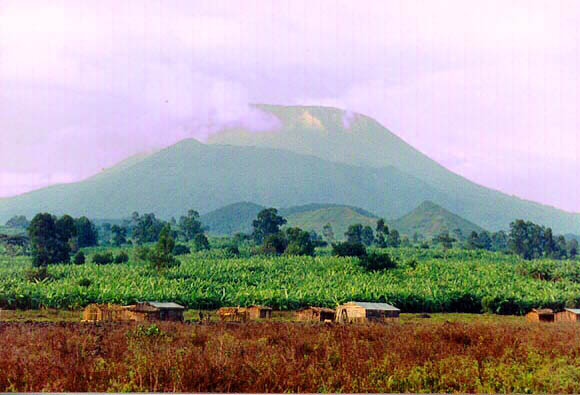 One of Africa's most notable volcanoes, Nyiragongo contained a lava lake in its deep summit crater that was active for half a century before draining catastrophically through its outer flanks in 1977. In contrast to the low profile of its neighboring shield volcano, Nyamuragira, 3470-m-high Nyiragongo displays the steep slopes of a stratovolcano. Benches in the steep-walled, 1.2-km-wide summit crater mark levels of former lava lakes, which have been observed since the late-19th century. Two older stratovolcanoes, Baruta and Shaheru, are partially overlapped by Nyiragongo on the north and south. About 100 parasitic cones are located primarily along radial fissures south of Shaheru, east of the summit, and along a NE-SW zone extending as far as Lake Kivu. Many cones are buried by voluminous lava flows that extend long distances down the flanks of the volcano, which is characterized by the eruption of foiditic rocks. The extremely fluid 1977 lava flows caused many fatalities, as did lava flows that inundated portions of the major city of Goma in January 2002.

The town of Goma is 11 miles (18 km) south of the summit of Nyiragongo and on the shore of Lake Kivu. Goma served as an encampment for nearly a million refugees from the civil war in Rwanda.

Nyiragongo is a stratovolcano. A crater at the summit of Nyiragongo contained a lava lake from 1894 to 1977. On January 10, 1977, the lava lake drained in less than one hour. The lava erupted from fissures on the flank of the volcano and moved at speeds up to 40 miles per hour (60 km/hr). About 70 people were killed. The fluid lava reached within 2,000 feet (600 m) of the Goma airport. From June 1982 to early 1982 the volcano was active with a lava lake in the crater and phreatic explosions and lava fountaining.

The most recent activity at Nyiragongo began in June of 1994. A lava lake once again filled part of the crater. The lava lake was approximately 130 feet (40 m) in diameter and sent lava flows onto the floor of the 2,600 feet (800 m) diameter crater. The surface of the lava lake was about 500 feet (150 m) below the level of the lake when it drained in 1977.

Nyiragongo is associated with the East African Rift and is part of the Virunga Volcanic Chain. It is in the Congo, not far from the border with Rwanda. Nyiragongo is in Virunga National Park and is of Africa's most active volcanoes.