Nyamuragira,also known as Nyamulagira, is a shield volcano located 9 miles (14 km) northwest of Nyiragongo. Nyamuragira is Africa's most active volcano. It is a massive basaltic shield volcano that rises about 25 km north of Lake Kivu. The broad low-angle shield volcano contrasts dramatically with its steep-sided neighbor Nyiragongo.

The 3058-m-high summit of Nyamuragira is truncated by a small 2 x 2.3 km caldera that has walls up to about 100 m high. Historical eruptions have occurred within the summit caldera, frequently modifying the morphology of the caldera floor, as well as from the numerous fissures and cinder cones on the volcano's flanks. At the vent, lava fountains often construct cinder or spatter cones. A lava lake in the summit crater, active since at least 1921, drained in 1938 during a major flank eruption. 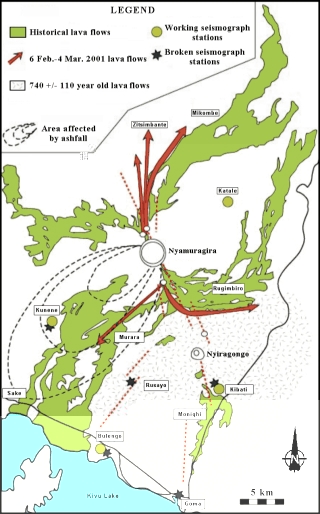 Since 1882, Nyamuragira has erupted 34 times. Most of the eruptions produce lava flows from fissures in the flanks of the volcano. Historical lava flows extend more than 30 km from the summit, reaching as far as Lake Kivu. Only the 1912-1913 eruption caused fatalities. The eruption of Nyamuragira on July 4, 1994 from a fissure on the west flank generated ash, lava fountains, and flows. Ash and Pele's hair fell 12 miles (20 km) from the volcano. 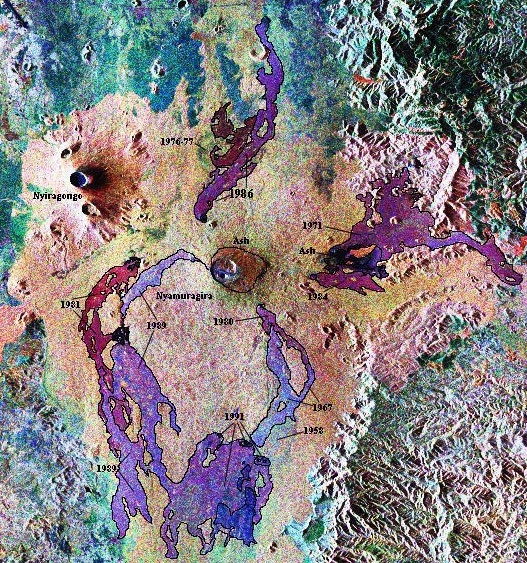 Parts of the description courtesy of the SI/USGS Global Volcanism Program.