Understanding volcanic gases is essential to understanding how and why volcanoes erupt. First, it is important to realize that gases can be both dissolved in a magma chamber at depth and can be emitted from volcanoes at the surface. It is dissolved gases that cause volcanoes to erupt and it is gases emitted at the surface that can cause hazards and changes in climate. A magma chamber at high pressures below the surface contains dissolved gases or volatiles. The density contrast between the magma and the surrounding rock, will allow the more buoyant magma to rise to the surface. As the magma ascends, dissolved gases come out of the liquid, or exsolve as tiny bubbles. Bubbles will grow and increase in volume, making the magma more buoyant and able to ascend even closer to the surface. As the magma travels upward, the overlying pressure decreases and the bubbles will expand and create a magmatic foam. It is not until the pressure in the bubbles becomes greater than the pressure of the overlying rock that the chamber will burst and produce a volcanic eruption. 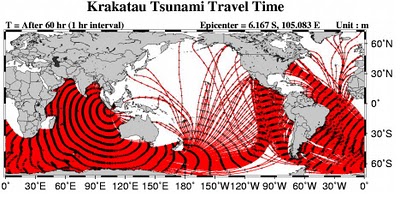 The viscosity, temperature and composition of the magma will determine whether the eruption is explosive or effusive. If the rapidly expanding gas bubbles remain in contact with the liquid and cause the magma to fragment into volcanic rock, an explosive eruption will occur, like the 1980 eruption of Mount St. Helens. If the bubbles can rise through the liquid and escape, then the eruption will be more effusive and generate lava flows like those we see in Hawai’i.  It is the expansion of gases as they rise to the surface that drives volcanic eruptions.

The image to the right, from Oleg Melnik, shows a magma chamber at depth with dissolved volatiles. As the magma rises, the bubbles come out of solution producing vesiculated magma. The magma fragments into volcanic rock at the fragmentation level. Gas-particle dispersion occurs at the top of the conduit just below the surface and pyroclasts erupt onto the surface during a volcanic eruption.

On a global scale, volcanic gases actually created the atmosphere and oceans that enable life to exist here on Earth. Once a volcano erupts, gases are emitted and released into the atmosphere. During large eruptions, gases have actually caused global climate change. In other systems, gases are emitted continuously into the atmosphere from soils, volcanic vents, fumaroles and hydrothermal deposits. The gradual release of gas acts as an irritant and may pose long-term health-hazards.  It is therefore important to monitor gases emitted from active volcanoes not only because they can pose very serious health risks and cause climate change but also because they are indicators of what is happening inside the volcano.

The most abundant gas is water vapor (H2O), followed by carbon dioxide (CO2), and sulfur dioxide (SO2). Secondary gases are also commonly emitted from volcanoes and include hydrogen sulfide (H2S), hydrogen (H), carbon monoxide (CO), hydrogen chloride (HCl), hydrogen fluoride (HF), and helium (He).  The greatest potential hazards to humans, animals and agriculture are SO2, CO2 and HF.