Deposits of nickel sulfides are mined from greenstone belts in many ancient volcanic terranes. The ore is associated with ultramafic lava flows called komatiites. Komatiites have more than 18 weight % magnesium oxide (MgO) and large amounts of the mineral olivine. Komatiites are derived from melting in the mantle. 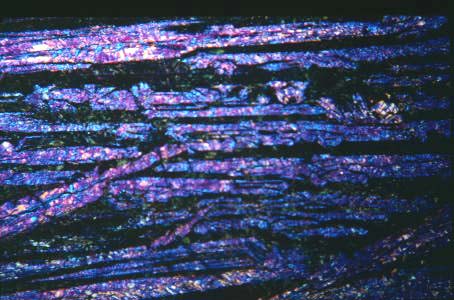 Komatiites have a unique texture called spinifex. The texture is an intergrowth of long, skeletal crystals of olivine and/or pyroxene. The texture is named for its resemblance to spinifex grass in Australia. Photo courtesy of Rob Hill, CSIRO. 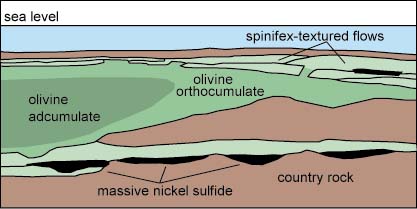 Cross-section of a typical komatiite lava flow.
Simplified from Hill and others, 1989.

Simplified from Hill and others, 1989. 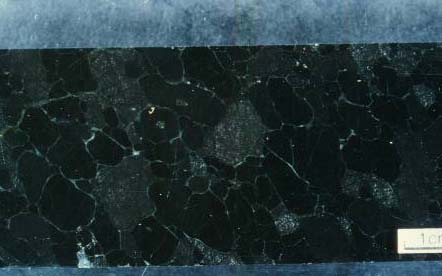 Nickel is commonly alloyed with other metals to provide resistance to corrosion and heat, and to add strength and hardness. These alloys are used for industrial and consumer goods. Most of the nickel produced is used to make stainless steel. Stainless steel contains about 8% nickel. Monel metal, a highly corrosion-resistant alloy, contains 67% nickel and is usedin ship building, food-processing equipment and in hospitals. Nickel is used by the military for armor plate. Nickel is used in alkaline batteries, dyes, insecticides and as a catalyst. Nickel is commonly used in coins.

The Sudbury District in Canada is the world's largest producer of nickel.

Another major nickel producer is in Western Australia and includes the Kambalda and MurrinMurrin deposits. MurrinMurrin consists of five deposits with a total of 11.9 million tonnes at 1.01% Ni and 0.07% Co.

In 1993, a large deposit of nickel-, copper-, and cobalt-sulfides (~150 million tons) was discovered at Voisey Bay on the northeast coast of Labrador, Canada. This deposit formed in magma chambers that fed large basaltic eruptions. 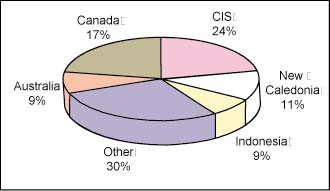 In 1994, about 875,000 tonnes of nickel was produced worldwide. Major producers are the Commonwealth of Independent States (former Soviet Union), Canada, New Caledonia, Indonesia, and Australia. Diagram from ITAM Nickel by the Minerals Council of Australia.