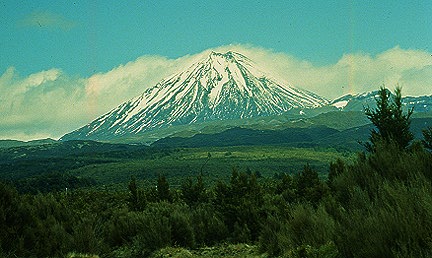 Ngauruhoe is a beautifully shaped volcano on the edge of the Tongariro massif. Ngauruhoe is new Zealand's most active volcano with 61 eruptions since 1839. Photograph of Ngauruhue by W.B. Hamilton, U.S. Geological Survey, November 1965.

Fire fountaining eruptions from the summit crater have produced lava flows in 1870, February 1949, and May-September 1954.

The most recent eruption at Ngauruhoe was in February of 1977.

Other images of Ngauruhoe