When we first hear of a natural disaster killing more than 1700 people, our minds instinctively jump to hazards such as a volcanic eruption, an earthquake, or even a flood, for being responsible for such casualties. It is not often that one would think to blame a volcanic lake as being the culprit. Not only was such a volcanic lake responsible, but an instance like this has actually happened more than once in different places. And what exactly about these volcanic lakes, such as Lake Nyos, Kivu, and Monoun, make them so dangerous? 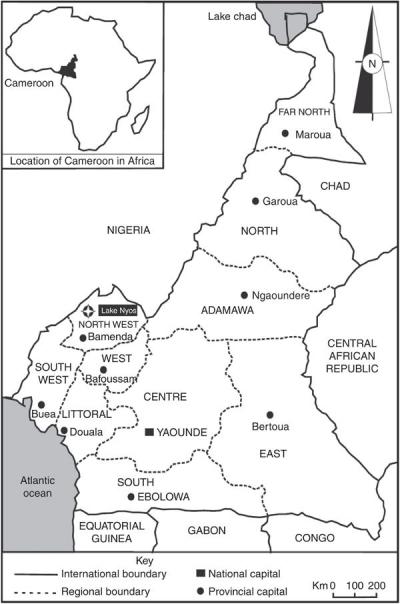 CO2. That's right. Carbon Dioxide gas. It is theorized that in such volcanic lakes, volcanic activity at depth, below the surface, releases carbon dioxide gas into the surrounding rock. Carbon dioxide then passes through the rock and is slowly dissolved into the groundwater. In cases where this occurs below a lake, the carbon dioxide dissolves into the lower depths of the lake, saturating this water with carbon dioxide. Depending on the kind of lake, layering can occur in a lake, where deeper water never reaches the surface because the water in the lake does not circulate and mix. Usually there is this periodic overturn of water, especially in crater lakes, so that the dissolved gases (which include not only carbon dioxide but sulfuric gases too) will reach the surface and be released into the atmosphere harmlessly. At Lake Nyos, however, this was not the case. The dissolved carbon dioxide remained trapped until something triggered its sudden release, resulting in a sudden, quick, and quiet disaster that cost over 1700 lives.

Lake Nyos, located in Cameroon, West Africa, had no signs of volcanic activity or that natural disaster could take place. It was a quiet, blue colored, beautiful lake, surrounded by small villages where the livelihood of the villagers was based on farming and raising cattle. On the night of the 26th of August, 1986, however, everything changed. 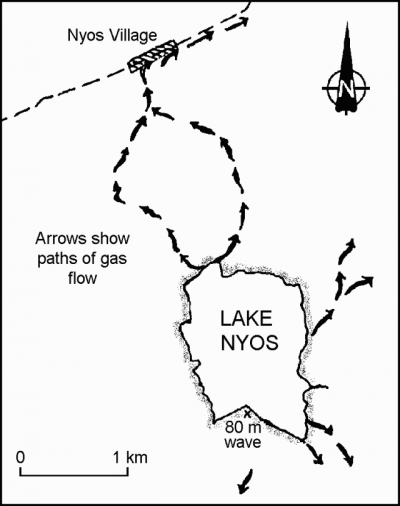 According to the reports of the few who managed to survive, it was in the evening when the villagers heard a rumbling sound. Leaving their homes to check on the source of the noise, they saw a tall fountain of water spouting out of Lake Nyos. Accompanying this fountain was the release of a white cloud of gas, that, as it grew bigger and taller, up to 100 m in height, settled on the surface of the lake and started to flow down the valley, forming a river of white gas 50 m tall. This river of gas flowed through the villages and the people in the villages started to lose consciousness, collapsing to the ground. The livestock such as cattle also lost consciousness. 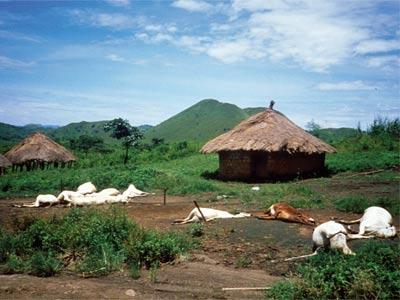 Figure: The aftermath of the 1986 disaster at Lake Nyos, showing the livestock that perished. (Image by USGS) 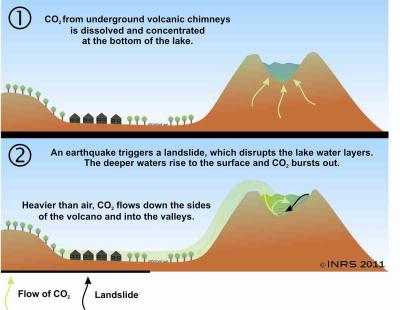 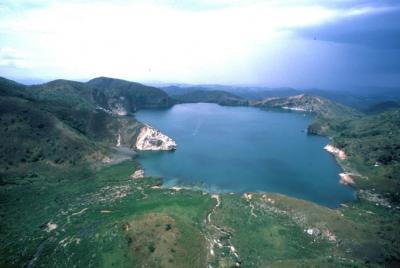 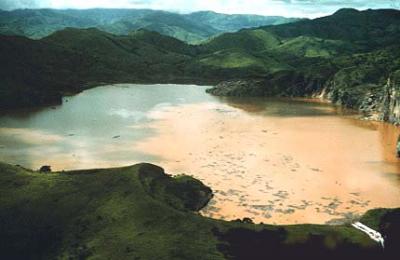 The brown appearance after the lake degassed and is saturated with carbon dioxide. (Image from USGS)

Is this thing common? Well, aside from Lake Nyos, Lake Kivu and Lake Monoun (all in Africa) are the only other two that are known to have such sudden eruptions, so if you live near any other lake, you’re not likely to be in any danger of such a phenomenon happening.

Because so little is really understood about this type of ‘eruption’ and it is hard to figure out what might trigger it or when it might happen, authorities in Cameroon have now taken to setting up a degassing station that is now self-sustained (after initial pumping to trigger the release) to ensure such a disaster does not occur again. 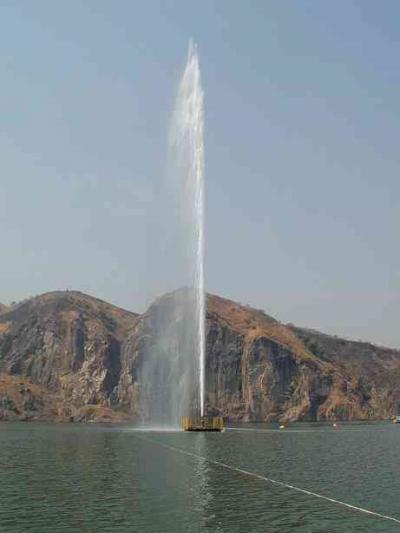 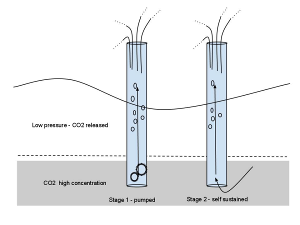 Structure set up by authorities (Diagram by Paschute/Wikipedia Commons)

If you'd like to find out more about Lake Nyos, check here.

For more on other lakes that pose similar hazards, check here.