Hekla - The Gateway to Hell

It was around October, in the year 1104. Without warning, Hekla, a volcano located in the south of Iceland, erupted, spewing forth large and extensive lava flows. This eruption started a period of activity at Hekla, continuing until now, placing Hekla as one of the most active Icelandic volcanoes. 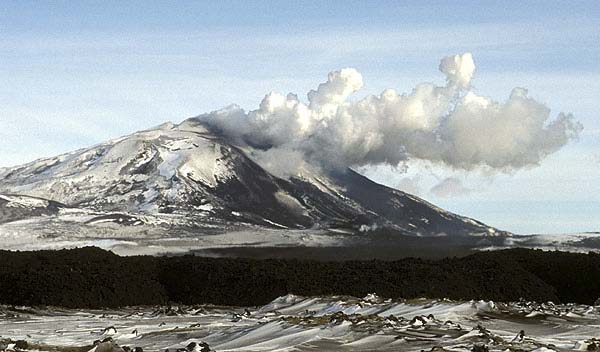 Hekla's eruptions, starting with the first historically recorded one in 1104, gain notoriety for the volcano. Observed by those living near it as well as travelers in ships passing by, Hekla was believed to be the "Gateway to Hell". From afar, the activity at Hekla, which included lava flows and lava fountaining, looked like the Earth had opened up and Hell was exposed. Birds that were seen flying in the area and around the crater were believed to be souls swarming around the entrance to Hell. Up until now, Hekla carries an ominous present for those who are superstitious; they claim it is where witches gather to meet the devil. 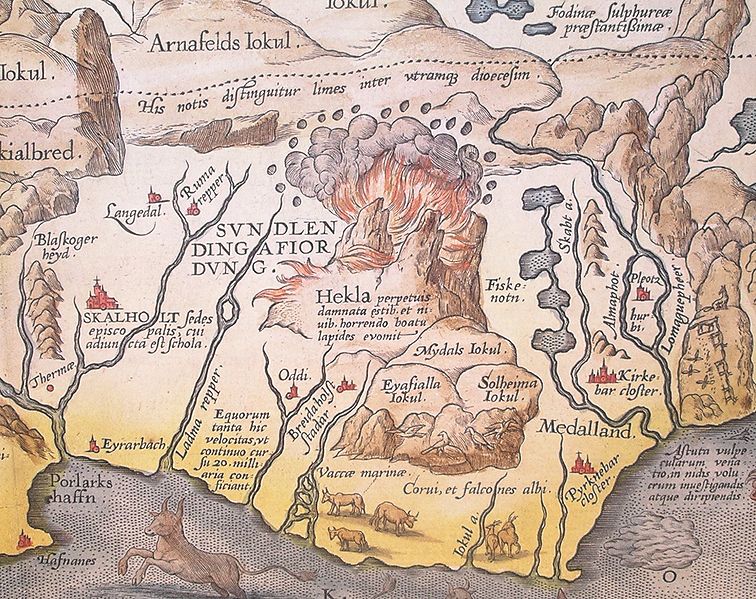 Figure: Drawn map of the Gateway to Hell, Hekla, from 1585, by A. Ortelius (Photo from Wikimedia Commons)

From a volcanological perspective, the activity at Hekla has made history, from its devastating effects on the agriculture to advancements in monitoring ash plumes. Activity at Hekla has always been destructive. The first recorded eruption in 1104 was a large plinian eruption, recorded as a VEI 5 eruption. Eruptions at Hekla occur along fissures, and eruptions don't always come out of the same fissure. During an eruption at Hekla, one of the biggest problems is ejected tephra and ash. Deposited tephra has caused fluorine poisoning in sheep, crops, and in humans. Along with ejected ash are lava bombs. Lava bombs found around Hekla after an eruption have been measured, weighing almost 12 tons!

Recent research into the volcanic products from Hekla has discovered old pyroclastic flows originating from Hekla; not only can Hekla produce fire fountains, explosive ejection of rocks, but also hot and devastating pyroclastic flows! A major eruption in 1693 produced both lahar flows AND a tsunami. 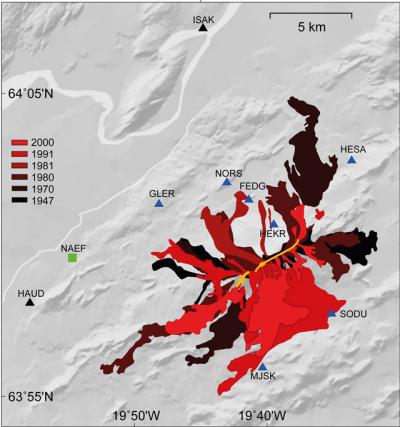 Figure: Past lava flows from Hekla (Figure by Sigrún Hreinsdóttir/ University of Iceland)

With all the activity occurring at the "Gateway to Hell", it was inevitable that we would learn something we didn't know before. In 2000, Hekla was undergoing a VEI 3 eruption, small in comparison to its bigger eruptions, producing an ash plume that rose up to 15 km and traveling north across Iceland. During this eruption, a NASA airplane accidentally flew through the plume, resulting in the first ever directly recorded measurements of a volcanic plume! The engine sustained damage as a result of the ash, but scientists received direct measurements of temperature and sulfur dioxide levels in the plume. Since then, there have been developments in technology to safely measure gas and temperature levels in ash plumes. 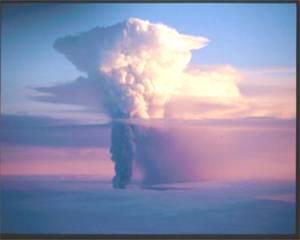 Hekla may not be the Gateway to Hell, but it sure has been an active volcano over the years!

For the report on the NASA flight through the plume, see here.