Newberry volcano is about 20 miles (30 km) southeast of Bend and is one of the largest volcanoes in the Cascades. The base of this shield volcano is 25 miles (40 km) in diameter. The summit caldera is 3 by 4 m iles (5 by 7 km). The highest point of the volcano, Paulina Peak, is 7,984 feet (2,434 m). Paulina and East lakes are inside the caldera. The present caldera is thought to be several overlapping calderas that formed at different times.

The volcano is made of basalt and basaltic andesite lava flows, andesite and rhyolite pyroclastic deposits, and dacite and rhyolite domes. The oldest dated rocks are about 500,000 years old. There have been numerous eruptions in the last 1 0,000 years, most in the caldera and most rhyolite in composition. The most recent eruption was 1,400 years ago. 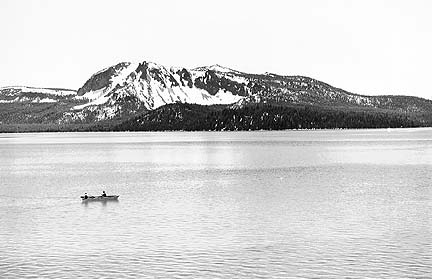 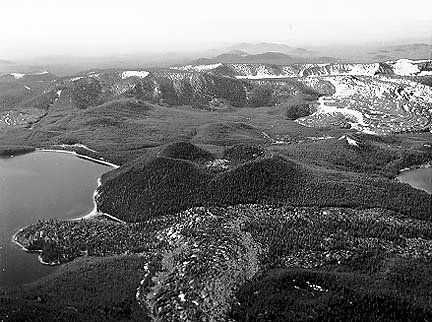 Looking south to interlake obsidian flow (foreground), central pumice cone (middle ground), Big Obsidian flow (upper right margin), and the inner and outer walls of Newberry caldera. East Lake is on the left and Paulina Lake is on the right. Photo courtesy of the Oregon Department of Geology and Mineral Industries. Special thanks to Rosemary Kenney.

View from Paulina Peak looking northwest to Paulina Lake. The northwest margin of the lake is bounded by the northwest rim of the caldera. Photograph by Dick Van Effen, August, 1989. 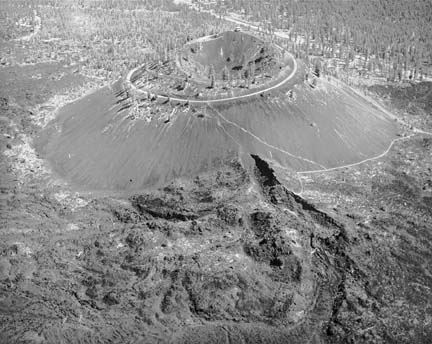 Lava Butte is a basaltic andesite cinder cone and an associated lava flow. The cone and flow are about 6,100 years old. Photo courtesy of the Oregon Department of Geology and Mineral Industries.

View to the south along the front of the Big Obsidian flow. The southwest rim of the caldera is in the background. Photograph by Dick Van Effen, August, 1989. 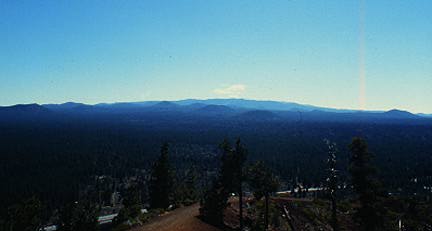 Additional information about Newberry volcano is presented on the Cascade Volcano Observatory homepage of the U.S. Geological Survey.