New Zealand has been occupied by a group of Polynesians, known as the Maoris, since about the fourteenth century (Anderson, 1969).  Since this time, the Maoris have created myths and legends involving several volcanoes in their native land.

Taupo, Tongariro and Maui the Fisherman

One of these legends tells of a man named Maui who, one day, went fishing with his brothers.  Maui used a jawbone as a hook and some flax soaked in blood as bait.  Maui pulled up a gigantic fish called Hahau-whenua; the fish was so big that there were fires burning and people walking on its back.  Maui's brothers started to cut and crimp the fish, but it began to struggle.  The fish thrashed back and forth, and its back was thrown into wrinkles and folds.  The land that was created from this fish is now known as Te Ika-a-Maui, or the fish of Maui, and it is covered in mountains and valleys.  Of these mountains, the volcanoes Taupo and Tongariro make up the belly of the fish (Anderson, 1969).

Taupo and the Lizard, Hotupuku

There is another legend involving the area around Taupo.  In this legend a huge lizard named Hotupuku lived near Taupo, and he ate people who traveled between Taupo and the village of Rotorua.  Villagers became angry and set out to find Hotupuku.  Hotupuku was eventually killed by men from the Rotorua village (Anderson, 1969).

The volcanoes Ngauruhoe, Tongariro and White Island are present in a Maori legend.  A medicine man named Ngatoro was climbing up Tongariro with a woman named Auruhoe.  He told his followers not to eat while he was gone in order to give him strength on top of the cold mountain.   When Ngatoro didn't return for some time, his followers thought him to be dead, and they broke their fast.  Ngatoro and Auruhoe immediately began to feel the cold, and Ngatoro prayed to his sisters in the faraway land of Hawaiki.  The sisters called upon fire demons that began swimming underwater toward Ngatoro.  They first came out of the water at White Island to see where they were, and the land burst into flames that are still burning.  The demons continued on underwater until they reached Ngatoro and burst through the summit of the mountain, thus creating the volcano Ngauruhoe.  Ngatoro was saved by the warmth, but Auruhoe had already died.  Ngatoro then took Auruhoe's body and threw it into the volcano.  The underwater path of the fire demons can still be seen, for everywhere they surfaced is now a thermal area (Vitaliano, 1973). 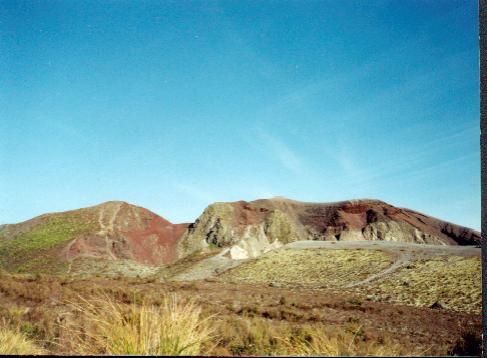 View near the top of Mount Tarawera (photo by Jordan Bremer)

The Giants: Tongariro, Taranaki, and Ruapehu

In another myth, the volcanoes Tongariro, Taranaki, and Ruapehu were all giants.  Taranaki and Ruapehu fell in love with Tongariro and proceeded to fight for her.  Taranaki threw himself at Ruapehu, but Ruapehu sprayed scalding water from his lake one Taranaki.  In retaliation, Taranaki threw stones at Ruapehu destroying his once beautiful summit.  Ruapehu was able to swallow the fragments of his cone, melt them, and spit them back at Taranaki.  Taranaki retreated up the coast to where he lives now, plotting his revenge (Vitaliano, 1973).

Eruption of Mount Tarawera in 1886

There are two myths involving the recent eruption of Mount Tarawera in 1886.  One of these legends blames the eruption on the people of Te Ariki village for eating forbidden honey.  Those in the village that ate the honey were killed, while people in nearby villages who did not eat it were allowed to live.  The other myth involving Mount Tarawera is similar, but more creative.  A man-eating demon named Tamaohoi once lived on the flank of Mount Tarawera. He was imprisoned on the mountain by Ngatoro. Tamaohoi slept for many centuries. Under the influence of the white man, the morals of the local people declined until there was a call for Tamaohoi to return and punish the sinners. Tamaohoi exploded from the mountain and killed many people in the village of Te Ariki. From Vitaliano (1976).

The Maoris also have a legend involving two extinct volcanic cones made of basalt named Kakepuku and Kawa.  Kakepuku loved Kawa but had to fight several opponents in order to win her over.  Kakepuku went up against Karewa, who was another basaltic hill.  Kakepuku defeated Karewa in a great battle causing Karewa to back off into the sea to where he lives today.  Karewa is now known as Gannet Island (Vitaliano, 1973).