Ruiz is the northern-most historically active volcano in South America (4.9N, 75.3W). Because of the high elevation of the summit (17,453 feet, 5,321 m), the volcano is capped by a large volume of snow and ice. In 1595 and 1845 summit eruptions melted snow and ice and produced mudflows that traveled tens of miles from the volcano. These mudflows were confined to the valleys that drain the volcano. The 1985 eruption of Ruiz, although only moderately explosive (VEI 3), produced mudflows which reached the town of Armero and killed more than 23,000 people. This eruption of Ruiz was the second mostly deadly of the century (Mount Pelee in Martinique was first, killing 29,000 people in its 1902 eruption). This photograph shows the volcano in the early stages of the 1985 eruption. Photograph courtesy of U. S. Geological Survey.

Armero, Colombia, destroyed by lahar on November 13, 1985. More than 23,000 people were killed in Armero when lahars (volcanic debris flows) swept down from the erupting Nevado del Ruiz volcano. When the volcano became restless in 1984, no team of volcanologists existed that could rush to the scene of such an emergency. However, less than a year later, the U.S. Geological Survey organized a team and a portable volcano observatory that could be quickly dispatched to an awakening volcano anywhere in the world. 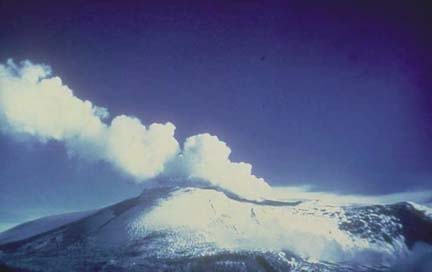