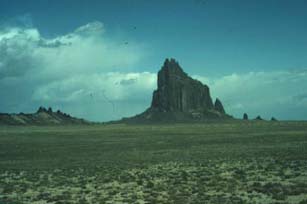 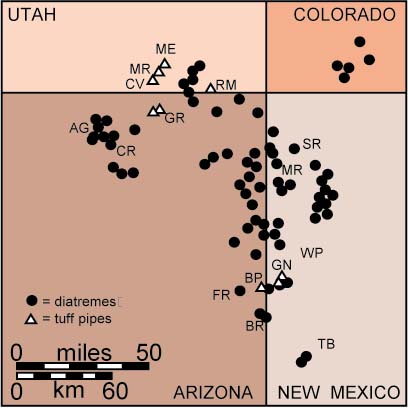 The Navajo volcanic field covers about 20,000 square km in the four-corners area of Arizona, New Mexico, Colorado and Utah. It is made of dozens on intrusions, diatremes, tuff pipes, and dikes. These volcanoes erupted from about 30 to 25 million years ago. Since then, erosion has lowered the surface hundreds of meters, exposing the deeper levels of these extinct volcanoes. Shiprock, shown above, is a classic example of a volcanic neck or plug. This is the feeding conduits of the volcano that has been filled with magma or volcanic breccia. The abundance of fragmented volcanic rock (breccia) indicates the explosive eruption of highly gas-charged magma. Letters identify diatremes: ME, Mules Ear; MR, Moses Rock; CV, Cane Valley; GR, Garnet Ridge; RM, Red Mesa; GN, Green Knobs; BP, Buell Park; AG, Agathla; CR, Church Rock; SR, Ship Rock; MR, Mitten Rock; RB, Roof Butte; WP, Washington Pass; FR, Fluted Rock; TB, Twin Buttes. Map from Roden and Smith (1979). All photos by Steve Mattox. 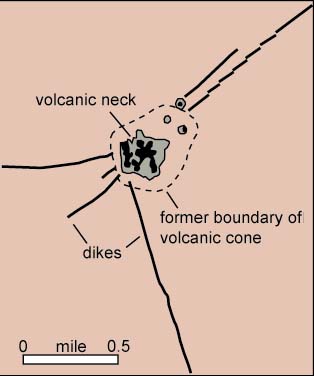 The volcanic plugs or necks of the Navajo volcanic field form crudely cylindrical masses. Dikes radiate from the neck. This is the remains of the shallow interior of the volcano. Map of Shiprock from Williams (1936). 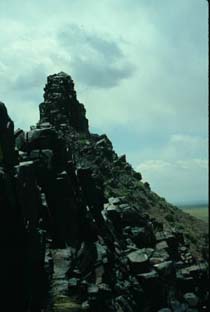 Photo along one of the radial dikes at Shiprock. 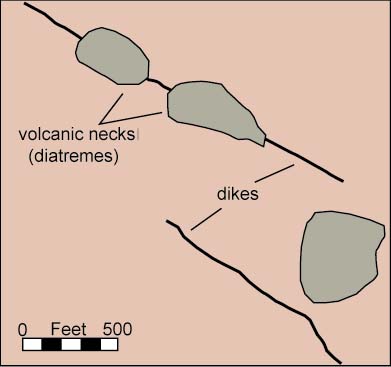 Map showing the size and shape of three volcanic necks (diatremes) and their relationship to nearby dikes. From Hack (1942). 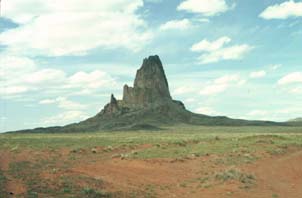 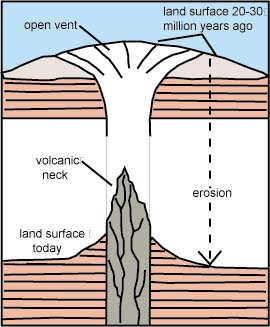 Cross-section of Agathla volcanic neck. The main body of tuff breccia is cut by dikes of minette. At the original surface, the conduit probably terminated at a maar. From Williams (1936).

Common type of neck in the Navajo-Hopi area. Diverging columns of lava on inward-dipping layers of tuff. The underlying Mesozoic sedimentary rocks are undeformed. From Williams (1936).

The rocks on this volcanic field are minette and kimberlite based on their composition. A minette, which is found in intrusions and diatremes, is a potassium-rich (3-7.5 weight percent K2O) rock with diopside and phlogopite (and sometimes olivine) crystals in a groundmass containing some of these minerals: sanidine, diopside, oxides, apatite, phlogopite, quartz, amphibole, and glass. The kimberlite, which is found in tuff pipes and dikes, is a microbreccia with crystals of olivine, enstatite, Cr-rich diopside, chlorite, and rare garnet, titanoclinohumite, oxides, and apatite in a groundmass of clays, chlorite, and talc.