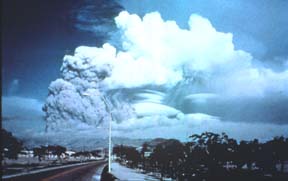 The volume of the Mt. Pinatubo eruption was about 5 cubic km of dacite. It was the third largest eruption of this century. It produced the greatest volume of SO2 ever measured, 20 Mt, about three times more than El Chichon (McCormick, 1992). This gas reached the stratosphere and circled the globe in three weeks (Bluth and others, 1992).

SAGE II map of the distribution of stratospheric aerosols from the Pinatubo eruption between June 14 and July 26, 1991 (i.e., the period of the major eruptions). Note the nearly two orders of magnitude increase in the optical depth in the tropics. Image by Pat McCormick, Langley Research Center. Slides from EOS Slide Set #1.

Most of the early aerosol was limited to tropical latitudes of 30 degrees N to 20 degrees S. Temperatures in the stratosphere increased as much as 3.5 degrees C at some latitudes (Labitzke and McCormick, 1992). It is estimated that the gases caused a global temperature decrease of 0.5 degree C for about 2 to 4 years after the eruption.