A mineral is a solid material, made of one substance, that occurs naturally on Earth. Most of the common minerals are made of crystals. A Crystal is a solid formed by a repeating, three-dimensional pattern of atoms, ions, or molecules and having fixed distances between the different parts. Minerals that do not grow in these regular or crystalline patterns are called Amorphous solids.

Quartz is a mineral made from one substance SiO2 (Silicon Oxide) that has a definite chemical composition. The quartz that you find in Asia has the same basic chemical make up as quartz found in Minnesota.

There are 92 naturally occurring elements on earth but only eight elements make over 98% of the minerals on the Earth's crust. They are, in decreasing quantity, 1 oxygen, 2 silicon, 3 aluminum, 4 iron, 5 calcium, 6 sodium, 7 potassium, 8 magnesium. The graph above shows you the amounts of these elements in the Earth's crust.

There are over 2000 minerals on Earth, but only 100 are commonly found. 30 minerals make up the majority of the rocks on Earth. You will be studying these minerals in this series of lessons. Rocks, as you learned in the last lesson, are made of two or more of these minerals.

There is a great difference in the way different minerals look. Some minerals sparkle in the light while others are dull and boring!! Some minerals are so hard that they can scratch steel while other minerals are so soft that they feel powdery and can be scratched easily by a fingernail. There are many ways that scientists classify or group minerals, in this lesson we are going to study five properties. A property is a characteristic of a mineral. Properties help scientists to better understand how the mineral was formed and also to help identify a mineral. The five properties that we are going to study are luster, hardness, cleavage and fracture, color and streak, and magnetism.

Luster is a property of a mineral that tells how the mineral reflects light. Luster gives you an indication of how "Shiny" a mineral is. The two main ways that geologists categorize a mineral's luster is Metallic and Non-metallic. The luster of a mineral may differ from sample to sample. Metallic minerals shine like metal, while non-metallic minerals vary greatly in their appearance. There are many different descriptions of non-metallic luster, we are going to discuss four. They are pearly, earthy, vitreous (glassy), and greasy. Pearly luster is iridescent, glows like a pearl. Greasy luster looks like the mineral is covered with grease, the mineral definitely shines. Minerals with an earthy luster have a dull look with no shine. Minerals with an earthy luster look as though they are covered with dirt or dust. The photos above shows examples of these four lusters. Minerals with a vitreous luster (glassy) look like small pieces of a broken glass bottle 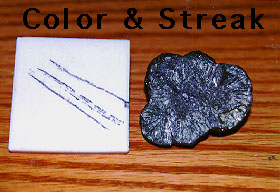 Color is the easiest of the properties to see, but it is not always the best way to identify a mineral. Many minerals have more than one color because of impurities that were present during the formation of the mineral. Quartz is an example of a mineral with many different colors. Quartz can be clear, white, blue, brown, and almost black. Amethyst is a quartz crystal with a purple color. The impurity that makes amethyst purple is manganese.

The photo above is showing a specimen of iron pyrite along with a streak plate showing the pyrite's streak.

In 1822 a German scientist by the name of Frederick Mohs set up a scale to determine the approximate hardness of minerals. (SEE CHART ABOVE!!!) He arranged the minerals in his scale from softest (Talc) to hardest (Diamond). The minerals get increasingly harder as you read down the scale, but they do not increase in hardness at a constant rate. Example: Calcite is not twice as hard as talc and a diamond is not 10 times harder than talc. In fact a diamond is over 40 times harder than talc. The line graph above shows you this relationship.

This property like color is arbitrary because the hardness of a mineral varies slightly from one specimen to the next. We can determine the approximate hardness of a mineral by running a group of tests. Scratch the mineral in question with a fingernail, penny, iron nail, or glass slide. If the mineral shows a scratch mark from one of the testing materials the mineral is said to be less hard than the mineral that scratched it. Example: A piece of pink feldspar will not be scratched by a fingernail, penny, or an iron nail, but will be scratched by a glass slide. The feldspar is said to be harder than the first three testing materials but not as hard as the glass slide.

You can use the following materials to run your own mineral hardness tests. 1) bar soap 2) fingernail 3) penny 4) easy to scratch knife blade 5) hard to scratch a knife blade 6) will scratch glass slide 7) quartz crystal.

Some minerals have a tendency to split or crack along parallel or flat planes. This property is easily seen in some minerals and you can test the mineral by breaking it with a hammer or splitting off sheets with a pen knife. These planes along which the mineral breaks are called cleavage planes. If the mineral splits easily along these planes the mineral is then said to have perfect cleavage. Mica is a good example of perfect cleavage. Feldspar is an example of a mineral with cleavage in more than one direction. Quartz is a mineral that has no cleavage at all. Quartz shatters likes glass when struck with a hammer. The biotite mica on the far left splits into sheets that are perfectly parallel. They form because of weak and strong bonds between the mica layers. The feldspar breaks into two planes at consistent angles.

Fracture is related to cleavage. Fracture occurs when a mineral breaks at random lines instead of at consistent cleavage planes. Many minerals that have no cleavage or poor cleavage fracture easily. The obsidian on the far right is a good example of a rock that has conchodial (glass like) fracture. Quartz is a mineral that also has conchodial fracture. 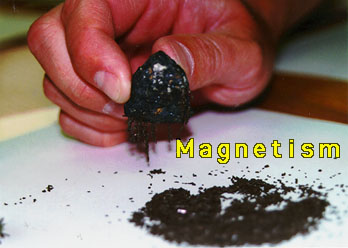 Only two minerals on earth are magnetic. They both have high quantities of iron. Magnetite is one of the magnetic minerals and pyrrhotite is the other. Magnetite was used by ancient sailors for compasses. They would chip off needles of magnetite and float them on water and watch the needle point to the north.

The photo above shows small pieces of metal fillings magnetically attached to magnetite! The rock is a natural magnet! 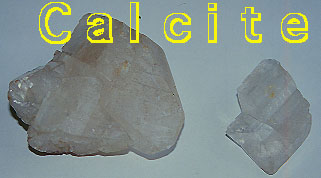 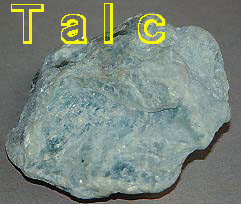 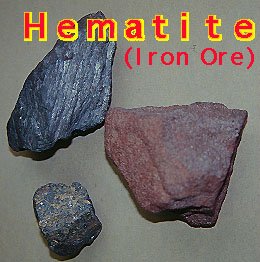 Hematite is the most important source of iron ore in the world. The production of iron has been important to nations of the world for over 2500 years. Today the addition of other minerals to iron has lead to the production of steel which is vital to the economy of the major countries on Earth. Hematite has a red or black color but the streak is always red. The iron in the hematite turns red when it comes in contact with water and oxygen. In other words this rock is rusted!! 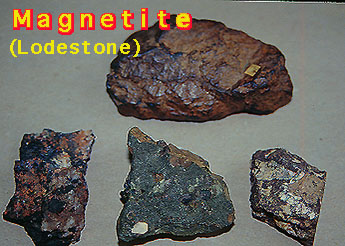 Magnetite is a mineral that has a very high iron content. Magnetite has a black or brownish-red color and a black streak. It has a hardness of about 6 on the Mohs hardness scale. It is one of two minerals in the world that is naturally magnetic. Magnetite, also known as lodestone, is found throughout the United States.

Magnetite is an important source of iron ore and occurs in many igneous rocks.

There is a city in Russia by the name of Magnitogorsk that received its name because of the unusually high quantities and quality of magnetite found in the mountains surrounding the city. Magnitogorsk is a leading iron manufacturing center in Russia today.

Galena is an iron sulfide and the main source of lead. Galena usually occurs in cubic crystals. If you hit a specimen of galena with a hammer it will shatter into small perfect cubic crystals. It has a metallic luster and a black to dark gray color and streak. Galena has a hardness of about 2.5 on Mohs hardness scale which is about as hard as your finger nail.

What is a mineral?

What are physical properties of minerals?

What eight elements make up over 98% of the Earth's crust?

Write a pararaph describing the properties and human uses for one of the minerals that you studied in this lesson.