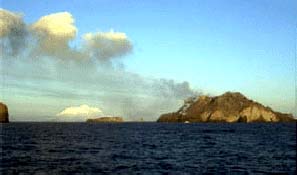 This photograph was taken by Dr. Dick Williams and provided by the Southwest Volcano Research Center.

Scientists have noticed smoke and steam plumes rising from an island southwest of the Australian mainland. They believe this is the end of an eruption beneath the ocean. In March, scientists first noticed smoke and steam rising from McDonald Island, 2,800 miles (4,500 km) southwest of Perth. It is the first active volcano that has been discovered in the Southern Hemisphere for over 50 years.

It is believed that the volcano began erupting in late December, 1996 or early January, 1997. When seawater entered the undersea magma chamber, molten rock came to the surface in the form of pumice, and steam rose several kilometers into the air.

McDonald is only Australia's second currently active volcano. It was thought to have been inactive for over 35,000 years. McDonald could erupt again at any time and could be very dangerous for anyone on the island at the time.

This information was summarized from a report by Andrew Darby to the Volcano Listserve.