Beautifully symmetrical Mayon volcano, which rises to 2462 m above the Albay Gulf, is the Philippines' most active volcano. The structurally simple volcano has steep upper slopes averaging 35-40 degrees that are capped by a small summit crater. The historical eruptions of this basaltic-andesitic volcano date back to 1616 and range from strombolian to basaltic plinian, with cyclical activity beginning with basaltic eruptions, followed by longer term andesitic lava flows. Eruptions occur predominately from the central conduit and have also produced lava flows that travel far down the flanks. Pyroclastic flows and mudflows have commonly swept down many of the approximately 40 ravines that radiate from the summit and have often devastated populated lowland areas. Mayon's most violent eruption, in 1814, killed more than 1200 people and devastated several towns. (Description courtesy SI/USGS Global Volcanism Program)

The most recent eruption, in 1993, began unexpectedly with an explosion.
The initial eruption lasted only 30 minutes but it generated pyroclastic flows that killed 68 people and prompted the evacuation of 60,000 others.
This photo shows pyroclastic flows descending Mayon on March 2, 1993. 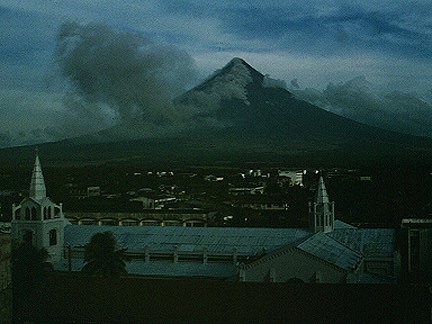 The Legend of Magayon

Legend attempts to unravel the mystery of the origin of this magnificent chunk of earth. It seems that there once lived a very beautiful native princess who had an uncle named Magayon. He was so possessive of his niece that no man dared to challenge his wrath by courting the favors of the young maiden. One day, however, a brave and virile warrior was so smitten by the princess that he threw all cares to the wind, clambered up through the window of the royal chamber and enticed the girl to elope with him. With Magayon at their heels, the couple prayed to the gods for assistance. Suddenly from out of nowhere, a landslide buried the raging uncle alive. Local folks now claim that it is Magayon's anger bursting forth in the form of eruptions.