One way to identify volcanic plains is by lava flow fronts. In this photo, one can see the advancing lava that filled a couple of ancient craters. Also note the smoothness of the lava plain and the rough ancient surface. 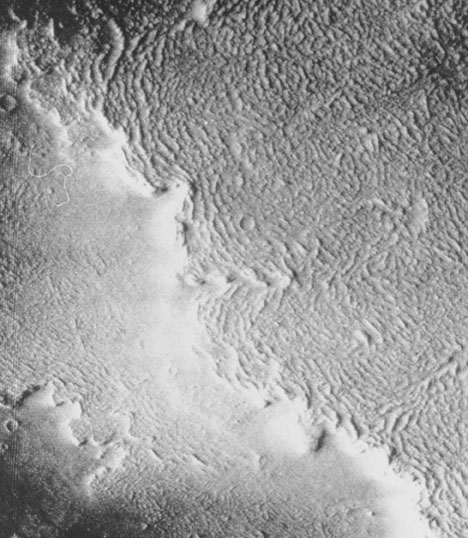 This image shows the front of a lava flow advancing from the upper right hand corner. The rough, parallel ridges are probably the cooler upper portion of the flow that crumpled as the flow advanced. The front formed a cliff of about 30 meters (100 ft) high. Light-colored dust particles accumulated at the foot of the cliff to form the bright-colored region of the image The volcanic plains on Mars cover about 60% of the planet. It is thought that volcanism may have contributed to the formation of these features. Plain-style volcanism probably occurred throughout much of Mars’ geologic history. This can be seen in the resurfaced highland and lowland regions of the planet. To form the plains the lava flows would have probably had to have a high eruption rate. These features usually display wrinkle ridges that can be 10s km in length and 1000s m wide.