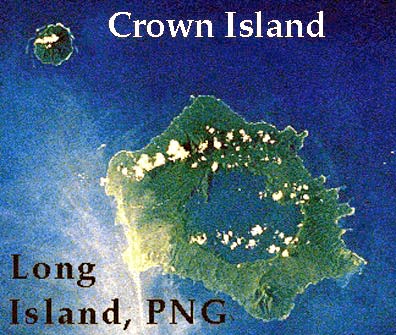 Long Island is located along the Bismarck Volcanic Arc which is northeast of the New Guinea landmass. This complex volcano contains a large caldera filled by Lake Wisdom which is about 6.8 miles (11 km) across. Within the lake is a small cone called Motmot. Past eruptions of Long Island have produced ash falls, lava flows, craters and cinder cones.

Geologic map of Long Island. Simplified from Ball and Johnson (1976).

Eruptions of Long Island have threatened and taken human life over the ages. The eruptions have been both through the lake and from the Motmot cone. It is believed that Long Island erupted in 1660 with a strength comparable to the 1883 Krakatau eruption.Huge ash deposits have been found in the New Guinea Highlands to support this idea. Long Island's history of eruption is poorly known before the 1930s. Eruptions are reported to have occurred in 1933, 1938, 1943, 1953, 1955, 1968, 1973, 1976 and 1993.