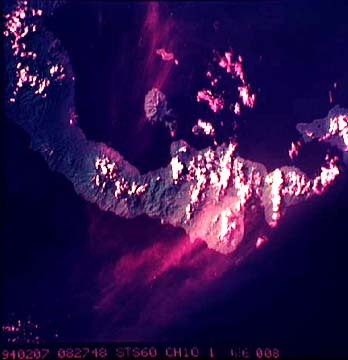 The Alert Level was reduced from 2 to 1 as a result of decreased volcanic activity from Oct. 13-19. Only low levels of gas were emitted from Lewotobi.
This information was summarized from the GVP/USGS Weekly Volcanic Activity Report

On Sept. 1, an eruption produced an ash plume that rose ~2.5 km high. The Alert
Level was raised to a 4 and evacuations took place in areas surrounding the volcano. By the 2nd, the Alert Level was lowered to 3.

At 23:30 on the evening of October 12, an explosion occurred and a weak thundering sound was heard. The explosion produced an ash column ~500 m high and ash deposits reached up to 5 km from the volcano. More explosions are expected to take place over the next couple of weeks and months. It has been placed under an alert level 4 warning.

On 1 July 1999, the Mount Lewotobi Volcano sent up a plume of ash and volcanic debris. No injuries were reported.

This information was summarized from Discovery Online