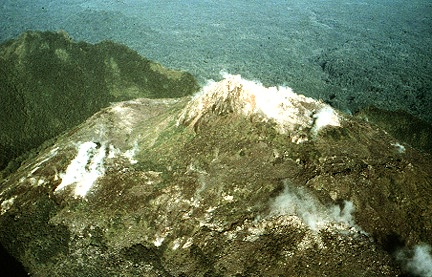 The large (VEI=4) explosive eruption at Lamington in 1951 was the first and only activity at this stratovolcano is historical time. Six days of precursor activity culminated in the catastrophic eruption. Nearly 3,000 people were killed by pyroclastic flows. An area of 68 square miles was destroyed. The eruption also produced mudflows and continued to 1956. The form of the cone and style of activity was very similar to Mount Pelee.

Repeatedly, domes were slowly extruded from the vent only to collapse and form pyroclastic flows. One dome grew 1,900 feet (580 m) above the floor of the crater prior to its collapse. Taylor's description of the 1951 Lamington eruption is probably the most detailed report on a Pelean eruption this century. This photo shows the central dome in 1970. Photo courtesy of Jack Lockwood, U.S. Geological Survey. 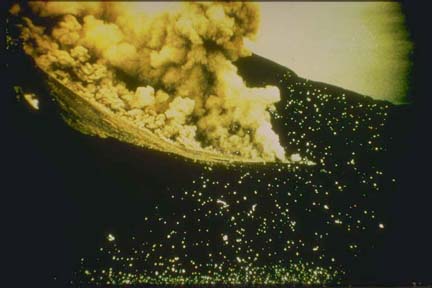