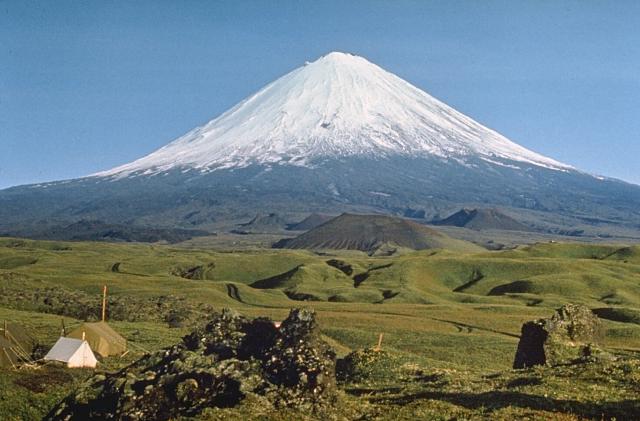 More than 100 flank eruptions have occurred at Kliuchevskoi during the past roughly 3000 years,
with most lateral craters and cones occurring on the NE (seen here) and SE flanks of the conical volcano at altitudes of 500-3600 m.
Photo by E.Y. Zhdanova (courtesy of Oleg Volynets, Institute of Volcanology, Petropavlovsk). 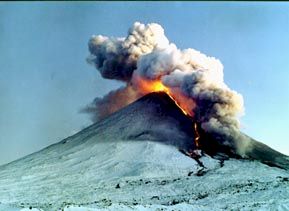 Photo provided by Andrew Logan.
Center for the Study of Active Volcanoes, University of Hawaii at Hilo

Kliuchevskoi is one of the most active volcanoes of the Kamchatka Peninsula in Far Eastern Russia. The volcano has had more than 80 eruptions since 1697. On September 15, 1994, gas and ash shot out of the crater, creating a column 2 km high. Over the next two weeks the eruption continued, and on 1 October a giant eruption occurred. A cloud of ash rose 15-20 km above the volcano. A picture taken by a weather satellite showed that the ash cloud extended 565 km to the SE, and that it was moving at about 140 km/hr (~85 mile/hr)! While ash was being blown out the top of the volcano, new rivers of lava flowed down its flanks. During the next three days the eruption stopped, and only steam rose above the crater.

Because few people live near Kliuchevskoi there was little immediate danger, and most of the ash blew out to sea. However, Kamchatka is on a major airline route and at least one Boeing 747 Jumbo Jet had to fly higher to avoid ash layers at 9-11 km elevation. Aircraft that flew through ash clouds from eruptions of other volcanoes have had their engines clogged with ash and the planes nearly crashed.