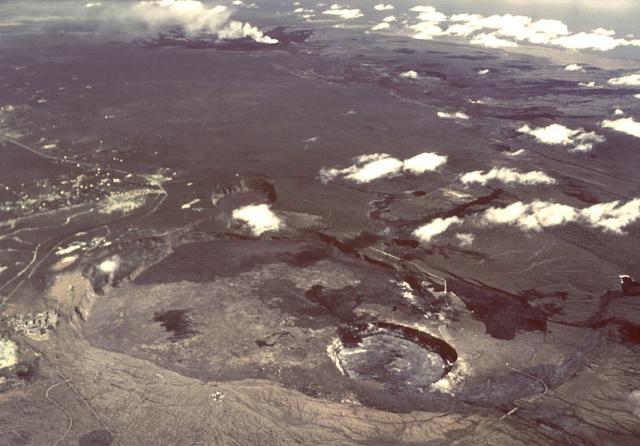 An aerial view in 1985 looks from Kilauea caldera in the foreground down the East Rift Zone to the steaming Puu O'o vent in the center background.
Photo by Jim Griggs, 1985 (U.S. Geological Survey).

Kilauea volcano, which overlaps the east flank of the massive Mauna Loa shield volcano, has been Hawaii's most active volcano during historical time. Eruptions of Kilauea are prominent in Polynesian legends; written documentation extending back to only 1820 records frequent summit and flank lava flow eruptions that were interspersed with periods of long-term lava lake activity that lasted until 1924 at Halemaumau crater, within the summit caldera. The 3 x 5 km caldera was formed in several stages about 1500 years ago and during the 18th century; eruptions have also originated from the lengthy East and SW rift zones, which extend to the sea on both sides of the volcano. About 90% of the surface of the basaltic shield volcano is formed of lava flows less than about 1100 years old; 70% of the volcano's surface is younger than 600 years. A long-term eruption from the East rift zone that began in 1983 has produced lava flows covering more than 100 sq km, destroying nearly 200 houses and adding new coastline to the island.