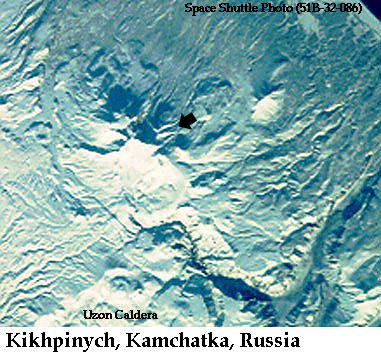 Kikhpinych is a stratovolcano that stands 1,968 ft (600 m) above the surrounding area. This volcano actually is an old ruined volcanic body with three fairly equal summits that are elongated in a north-northeast direction. Savich, the northernmost cone, is Kikhpinych's center of activity. Kikhpinych's southern summit named Belaya (white) is white and more levelled than the other two. This white coloring comes from pumices of rhyolite and dacites

Savich is reddish black in color with the central portion of its crater consisting of the remains of the ruined stratovolcano. Savich is the youngest cone of Kikhpinych and is made of fresh scoria and lapilli. Savich has lava flows of andesite basaltic lava that filled the saddle between itself and the central summit of the volcanic body, from here it ran down the northeastern slope of Kikhpinych. The main active crater at the summit of Savich has a diameter of about 200-230 ft (60-70 m) and a depth of 100 ft (30 m). On the northwest inside walls of this crater are weak fumaroles An older cinder cone lies close to the Savich cone. Very weak fumarole activity has been seen on the nearby cinder cone. Permanent solfatara activity occurres in the Savich crater and at the southwestern foot of Kikhpinych. Kikhpinych has erupted at least eight times with its lastest eruption occurring in 1550 AD.