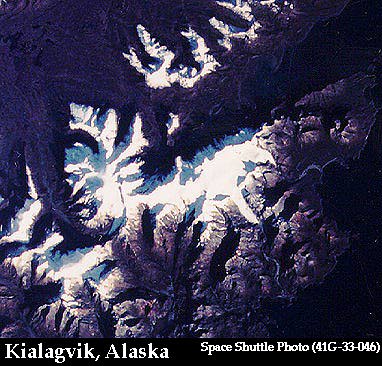 Kialagvik is a small, poorly known central volcano. Its volume is about 5 cubic km. The volcano is composed mostly of andesite and dacite. It rises ~2950 ft (900 m) from its base. Kialagvik is mostly covered with snow and ice. It was built on extrusive rocks from other vents. Lava flows from the volcano are mostly andesitic, although the overlying block and ash flow deposits are mostly dacite. Kialagvik has a central dome that rises ~1150 ft (350 m) above the surrounding ice field.