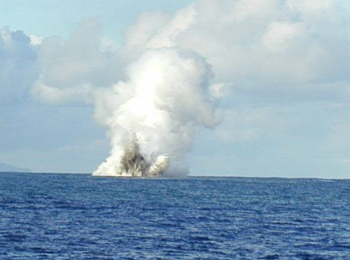 This photograph was taken by CSIRO - Australia.

A recent news release stated that volcanic activity was observed on March 15 at Kavachi; this activity follows a long period of quiescence.

During an eruptive cycle, a 15 m-high island formed at Kavachi. By the 16th, though, the summit had reduced to ~32 m below sea level. For the first time in 4 years, no evidence of volcanic activity was observed.

There were explosive eruptions that occurred daily during November 27th to December 13th. On January 13th, volcanic debris and gas bubbles were seen rising up from the submarine volcano. This activity was more vigorous than similar activity that was seen in December of 2001. This activity was also accompanied by frequent loud noises.

This information was summarized from the Smithsonian Institution's Preliminary Notices of Volcanic Activity.

On 14 May, a scientists on the CSIRO research vessel Franklin arrived at the Kavachi Seamount location and were able to document a new phase of island building eruptive activity. On this date, eruptions ejected ash and incandescent blocks of lava up to 70 m above sea level, and sulfurous steam plumes mushroomed to 500 m. The Kavachi Seamount had been dormant for 9 years. Located in the Solomon Island chain of volcanoes, the Kavachi Seamount is only 30 km from the boundary of the Indian and Australian tectonic plates. A roughly conical feature rising from a seafloor depth of 1100 m, it is about eight kilometers in diameter at its base and has produced ephemeral islands at least twice in the past century. The peak of the volcano is forming a sandy ashen beach two meters below sea level.

This information was summarized from Smithsonian Institution's Preliminary Notices of Volcanic Activity.

This photograph was taken by John Grover in the early 1960s, courtesy of the U.S. Geological Survey.