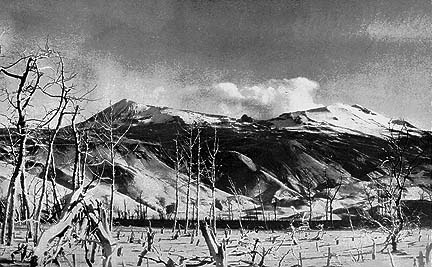 Photo of Mount Katmai by R.F. Griggs of the 1915 and 1916 expedition. Griggs placed the eruption in perspective:

"The magnitude of the eruption can perhaps be best realized if one could imagine a similar outburst centered in New York City. All of Greater New York would be buried under from ten to fifteen feet of ash; Philadelphia would be covered by a foot of gray ash and would be in total darkness for sixty hours; Washington and Buffalo would receive a quarter of an inch of ash, with a shorter period of darkness. The sound of the explosion would be heard in Atlanta and St. Louis, and the fumes noticed as far awa y as Denver, San Antonio, and Jamaica." (Robert F. Griggs, National Geographic Magazine, 1917, v. 81 no. 1, p. 50)

Katmai was once a cluster of 3 or 4 small volcanoes. The 1912 eruption of Katmai was the largest (VEI=6) in North America in this century . More than 7 cubic miles (30 cubic kilometers) of ash was erupted in only 60 hours, covering 46,000 square miles (120,000 square km) in greater than 0.40 inch (1 cm) of ash. Novarupta was the vent for the eruption. Pyroclastic flows traveled as far as 15 miles (23 km) and filled a valley adjacent to the volcano to produce the Valley of Ten Thousand Smokes. The withdrawal of magma from beneath the cluster of small volcanoes at Katmai caused the area to collapse and produce a caldera. A lake has filled part of the caldera. 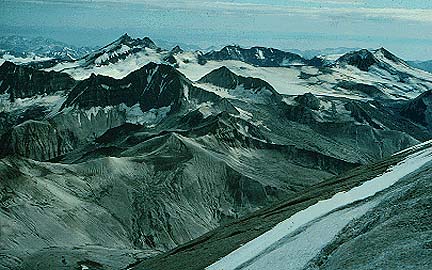 Katmai from the summit of Griggs. Katmai is in the middle and to the right. Photo by Jay Robinson, National Park Service. 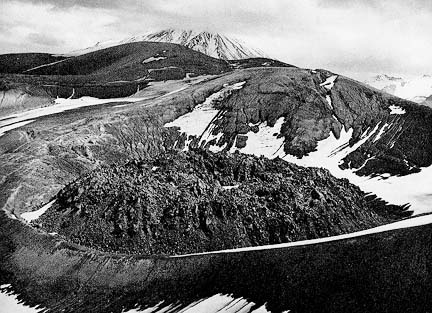 Novarupta is a pumice-filled depression that was the vent for the 1912 eruption. A rhyolite dome extruded into the vent after the eruption. The dome is 1,300 feet ( 400 m) in diameter and about 210 feet (65 m) high. Photo by Jay Robinson, National Park Service. 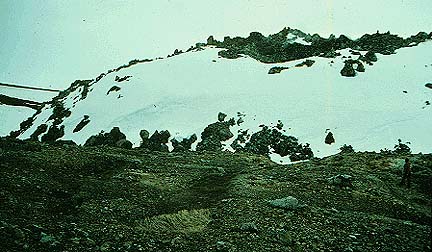 This photo shows a close up of the edge of the Novarupta dome. A person is on the right margin of the photo for scale. Photo by Jay Robinson, National Park Service. 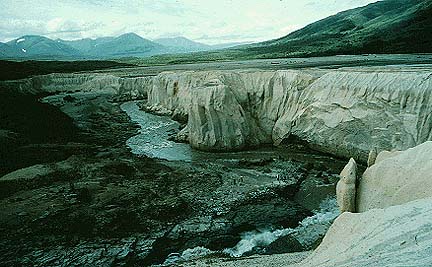 Pyroclastic flows erupted from Katmai filled the adjacent valley to produce the Valley of Ten Thousand Smokes. The valley is about 12 miles (20 km) long and about 2-6 miles (3-9 km) wide. Streams have cut through the deposits. Note the people near the stream. Photo by Jay Robinson, National Park Service. 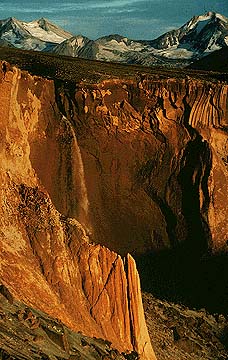 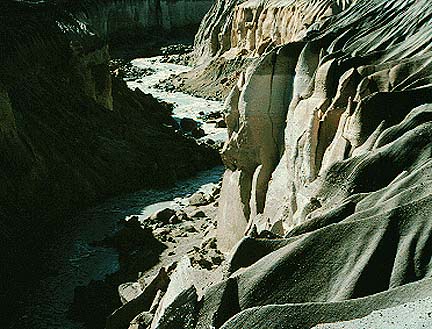 In other places, the pyroclastic flows change color from light at the base to dark near the top. This color change reflects a change in the composition of the ash from rhyolite (at the base) to andesite-dacite (near the top) as the eruption progressed. Photo by Jay Robinson, National Park Service.