Map of the Eldgja fissures and lava flows. Some fissures are now buried by the Myrdalsjokull ice cap. Lavas from the 1783-1784 Laki eruption buried some of the distal Eldgja flows. Map simplified from Thordarson and others.

The eruption at Eldgja in ~935 AD lasted 3-8 years and produced 19.6 cubic km of lava, making it the largest basaltic flood lava eruption in historic time. The fissure was about 30 km long. An estimated 219 Mt of SO2 was released to the atmosphere during the eruption which may have produced as much as ~450 Mt of H2SO4 aerosol. The amount of volcanic Eldgja eruption was over several years in duration the environmental impacts probably did not exceed those produced by Laki and Tambora.

The Eldgja fissure system had a smaller eruption in 5050 BC. 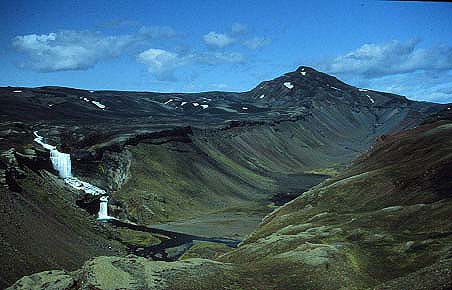 This is a picture of the northern part of Eldgja, a 30 km ridge in southwest Iceland. Note the natural bridge across the waterfall Ofaerufoss. The bridge was washed away one spring due to melting water. - Uli Wagemann 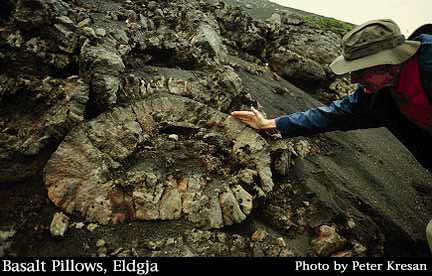 This photograph shows large basalt pillows that were formed beneath a glacier in a fissure area at Eldgja.