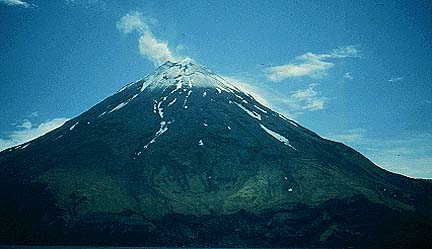 Kanaga is one of the most southerly stratovolcanoes in the Aleutian arc. This nearly symmetric volcano was constructed in an older caldera called ancient Mount Kanaton. It has had seven know eruptions since 1763. The most recent eruption was in 1994. This photo of Kanaga is to the northwest from Adak Island. Photo by Howard Powers, U.S. Geological Survey, ca. 1950. 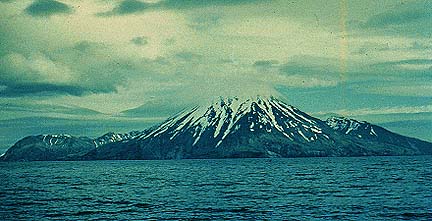 Kanaga volcano. The rim of the older caldera can be seen behind Kanaga. Photo by R.E. Wilcox, U.S. Geological Survey, June 1952.

Aerial view of Kanaga volcano from the east. The rim of the ancient caldera is to the left of the symmetrical cone. Photograph by U.S. Navy. Plate 6 from U.S. Geologic Survey Bulletin 1028-D.