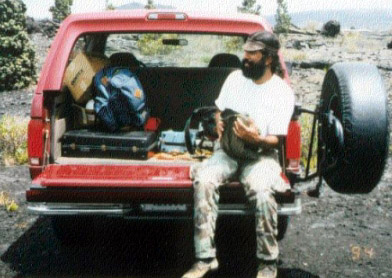 Jim Kauahikaua is a geophysicist with the U.S. Geological Survey’s Hawaiian Volcano Observatory. He received his Bachelor of Science from Pomona College in 1973, his Masters degree from University of Hawai`i in 1976 and his Ph.D. from the same institution in 1982. Jim has worked for the U.S. Geological Survey since 1976, first for the Branch of geophysics in Denver, then at Hawaii Volcanoes National Park . He began working at the Hawaiian Volcano Observatory in 1988. Jim is busy studying the current eruption of Kilauea Volcano. He also enjoys detailing the connection between Hawaiian mythology/stories/history and geological events. He is a wonderful roll model for native Hawaiian children and devotes a great deal of time to teaching kids about volcanology through Hawaii’s Na Pua No`eau program.

(Image Caption: Geophysicist Jim Kauahikaua waiting for a helicopter to take him out to work on Kilauea Volcano. Photo courtesy of the Hawaiian Volcano Observatory.)

I always knew I wanted to be a scientist in Hawai`i, but I didn’t know what kind until college. My high school only offered physics, biology, and chemistry and I started college thinking I wanted to be an oceanographer. The college required a year each of physics, biology, chemistry, AND geology before taking any oceanography courses. I took geology first and liked it so well that I switched majors immediately. My post bachelor’s degrees were in geophysics and my initial contact with volcanology was through the USGS applying various surface geophysical methods to study subsurface lava. That interest kind of morphed into general volcanology so that now I attempt integrated studies using geophysics (as well as geology) to study volcanological phenomena.

February 2, 1996 when the tube system was overwhelmed by a tenfold pulse of lava.
There were dome fountains out of several of the skylights feeding fast-moving lava flows. As it got dark, the scenes were fantastic! 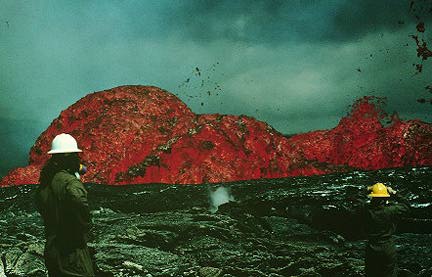 Jim Kauahikaua in front of a dome fountain from a skylight at 2,450 feet elevation.
Photo by Carl Thornber, U.S. Geological Survey, February 1, 1996.

Nothing is funnier than seeing visitors in high-heels trying to walk over uneven pahoehoe. That aside, probably the next funniest thing happened during a video interview of a colleague who had not been in Hawai`i very long and who shall remain nameless. The video shoot took several days and I accompanied the interviewee on the day where he was to be interviewed about general Hawai`i geology stuff. The interviewer asked the question, I put together a reasonable response, and my colleague would then answer the interviewer in his own words on camera. I had to look away every time he was on camera for fear that I would laugh and disrupt the interview.

What was the strangest experience you ever had on a volcano? Has anything weird ever happen to you?

I ran into a strange woman one day while working out in the middle of nowhere behind a locked gate. She looked really weird with a young body but old wrinkled face and white hair. I never saw her again. (Eds. note: Over the centuries, people have reported seeing a mysterious woman on the volcanoes of Hawai’i who is either very old and wrinkled or very young and beautiful. Many think that she is the spirit of the Hawaiian Goddess Pele.

Have you every been scared or really worried while working on a volcano?

The time I worried the most was at the end of January 1997 when Pu`u `O`o had completely drained leaving a hole 250 by 400 m and at least 250 m deep. I wanted to attempt measuring the depth of that hole, but I had to do it by walking up to the edge of the hole! We got an estimate, but I could never make myself walk right up to the edge. 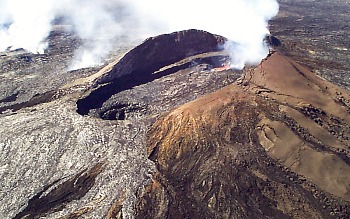 Pu`u `O`o crater and the remnants of the once 255 m-high cinder and spattercone.

The worst thing was completely bureaucratic – the agonizing uncertainty of the RIF in 1995 within the USGS Geologic Division (eds. note: in 1995, about 500 employees from the Geologic Division of the USGS, or 20% of it’s workforce, lost their jobs).
What do you like best about your chosen profession?
What’s the most difficult thing about being a volcanologist?
I like the unpredictability of events and the challenge of setting up experiments to study those events. You have to be flexible to take advantage of whatever is going on at the moment. If there is an a`a flow, then you are studying `a`a flows – if there is a large skylight into an active lava tube, then you are studying lava tubes, etc. Working at the Hawaiian Volcano Observatory has been a real highlight, especially the people I have gotten to know through working in the field on common problems.
‹ Christina Heliker up Kathy Cashman ›