Japan is a country steeped in myth and legend. Considering the country is 71% mountainous terrain, it is easy to understand why much of Japans' folklore concerns the mountains on the islands (2). Japan has 109 volcanoes, in differing states of activity (3).   Mt. Fuji is also the highest and most venerated mountain in Japan, standing at 3776 meters tall (2).   Mount Fuji is also perhaps the worlds most well known mountain.   From the beginnings of recorded history in Japan, Mt. Fuji has been important to Japanese culture, tradition, myth and legend (2).   The mountain was considered a sacred place for the people of Japan, until the Meiji Restoration, which occurred in 1868 (2).   Indeed, the importance of the mountain is stated rather elegantly in a passage from Myths and Legends of Japan (F. Hadland Davis):

"Fuji dominates life by it's silent beauty: sorrow is hushed, longing quieted, peace seems to flow down from that changeless home of peace, the peak of the white lotus." (1) 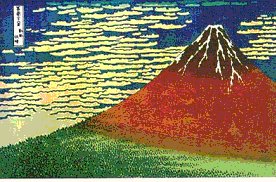 "Red Fuji" By Hokusai Katsushika
The name Fuji is believed to be derived from "Huchi" or "Fuchi", the words for the Aino Goddess of Fire (Davis 141)

There are many folk tales surrounding Mt. Fuji, known popularly as Fuji-san in Japan (san meaning mountain, not to be confused with the male honorific San) (2). Mt. Fuji is a stratovolcano located in Honshu, Japan's largest island. The last  eruption occurred in 1707 when a main vent eruption deposited 6" of volcanic ash on Edo (Tokyo) (3)  Though it has been dormant since then, it is still a very important symbol in Japanese culture(2). Pilgrims have been climbing the mountain as a show of religious piety for generations, as shown by a record from June of 1500 A.D. describing the masses of people making journeys up the sacred mountain (2). Now every summer, close to 500,000 people make trips up the mountain; however, unlike the pilgrimages of old, women are now permitted to ascend the mountain (2).

The creation of Mt. Fuji is itself a matter of legend in Japan - the tale goes that the mountain was born in a single day (1). The story relates the experiences of a woodsman named Visu. He was awoken one night by a loud noise, seemingly coming from under the Earth.   The woodsman believing it to be an earthquake, grabbed his family and ran from their home  (1).  When he emerged from the doorway, he saw that the land near his home, which had been flat and dead, had become a mountain! Visu was so in awe of this occurrence, and the majesty of the mountain, that he named it "Fuji-yama", the Never-Dying Mountain  (1). While geologically, Mt. Fuji dates back to around 8500 B.C. (3), this myth places the legendary creation of Mt. Fuji in (2)86 B.C. (4).   This later date roughly coincides with the geologic record of an explosive eruption that occurred around this time frame (3). While it is not known what the true source of this myth is, it is not outside the realm of conjecture to suggest that the myth could have been influenced by the aforementioned eruption.

Mt. Fuji is the source of many myths, underscoring its importance in Japanese society; it has been the home of multiple deities, including the goddess Sengen, also known as the Goddess of Fuji, whose temple was once said to reside on the summit of the mountain  (1).   In the days of religious pilgrimages to Mt. Fuji, it is said that Sengen would throw from the mountain any pilgrims that were impure of heart  (1). 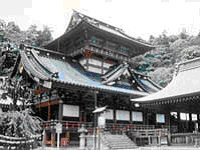 A Shinto shrine dedicated to Sengen, the Goddess of Fuji, who is said to reside within the main building of the shrine (city.fushiyoda)
Mt. Fuji, Fuji-san, or Fuji-yama; no matter the name, it is clear that the mountain has been an important part of Japan from time immemorial (2). The mountain is home to many more myths not covered here, and the reader is encouraged to find out more on his/her own, and discover that the tales of its creation were truly only the beginning for this mountain.