Iwo-jima (the name means "Sulfur Island") is a submarine caldera. Mt. Suribachi, also called Suribati-yama, is a cone in Iwo-jima. Iwo-jima has at least ten historic eruptions, all in this century. The most recent eruption was in 1982. All of the eruptions are non-explosive or small and most are phreatic, caused by the interaction of water and magma. There has more then 10 m of uplift on the island since 1952.

Iwo Jima is gourd-shaped in plan, elongated NNE-SSW. Relief is subdued so that from a distance Iwo Jima resembles the uplifted reefal islands of the Western Pacific. Only the distinctive cone of Suribati-yama at the southwest end indicates that this island is very young and entirely volcanic in origin. Iwo Jima can be subdivided into three regions: the broad dome of Motoyama on the NE, the distincitve cone of Suribati-yama on the SW, and Tidorigahara, which connects Motoyama and Suribati-yama. Motoyama is a broad dome of tuffs and intrusive vitrophyre. The last eruption on Motoyama has been C-dated at 2600±80 myrs before present (Stern et al., 1984, p. 157). Suribati-yama is younger than this, but is otherwise undated. 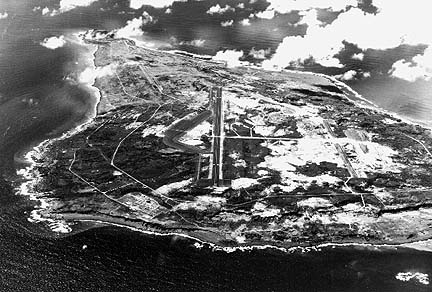 Iwo Jima viewed from NNE toward SSW. Photo taken in mid-1940's (after battle).

The subdued relief of Iwo Jima made it a natural site for airfields during World War II. During the battle for this island nearly 20,000 US and Japanese soldiers lost their lives here. Not only is the volcanic morphology of Iwo Jima different than other island arc volcanoes, so is its composition. Iwo Jima lavas are unusually enriched in potassium and other related elements, and are known as 'shosohonites'.

Suribati-yama from the ENE (invasion beach) 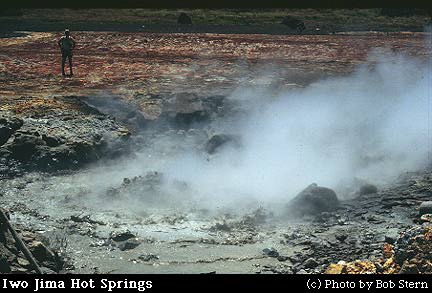 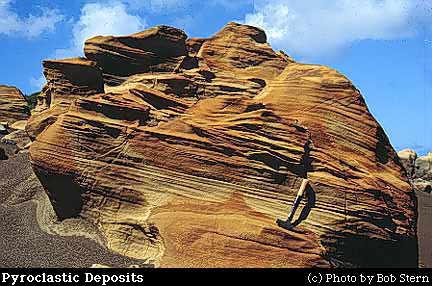 Cross bedded proclastic deposits from the 2600mybp eruption of Motoyama