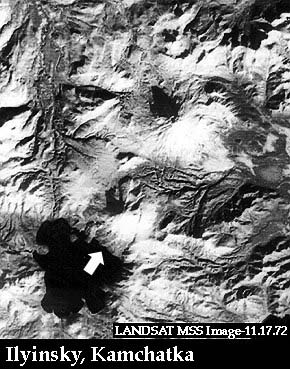 Ilyinsky is located on the northeast portion of the Paushetka caldera fault boundary. It is a typical stratovolcano that is about 8 km wide at its base. Two shallow depressions occur at its summit, both totaling a diameter of about 200m and only 5 m deep.

A young cone is located in the caldera at its summit.

The youngest Ilyinsky lava flows can be found on its southwestern slopes near Kurile Lake. Ilyinsky's activity also made small cones and domes that form islands in the lake. Strong eruptions in 1901 occurred from a crater on its northwest slope.

Erlich, Edward 1986 Geology of Calderas of Kamchatka and Kurile Islands with Comparison to Calderas of Japan and the Aleutians, Alaska Open-File Report 86-291, US Dept. of the Interior- Geological Survey, p91.

Vlodavetz V.I., Piip B. I. 1959 Kamchatka and Continental Areas of Asia. Catalog of Active Volcanoes of the World, Rome IAVCEI, 8: p7-9.