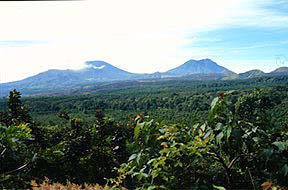 Ijen is a stratovolcano with a summit caldera. The caldera is about 10 miles (16 km) in diameter.

The fertile soils in the caldera are used to grow coffee.

This photo is the view to the east across the caldera.

Kawah Ijen, the active vent, is fuming on the left. 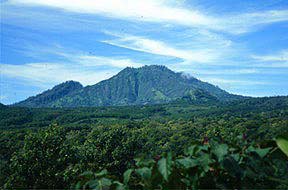 A dozen extinct stratovolcanoes have grown on the margins of the caldera. 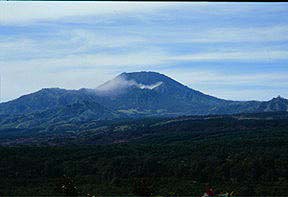 Close-up view of Kawah Ijen. View is to the east.

Compare the map with the Shuttle photo below! 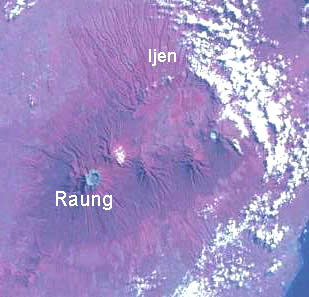 Space Shuttle photo STS049-097-050 taken in May 1992 and looking northeast across Ijen Caldera and Raung. 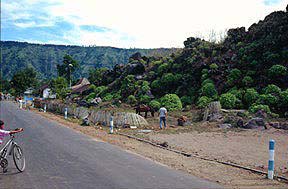 View across the floor if Ijen caldera. The caldera wall is in the distance.

The margin of a blocky lava flow is to the right.

The photo was taken in one of the dozens of villages in Ijen caldera. 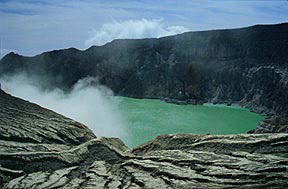 Sulfur gas is condensed in the crater and mined. 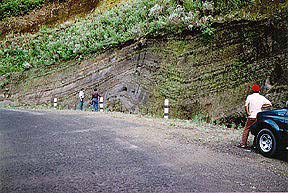 Airfall deposits on the east flank of Ijen.

Ijen has erupted six times since 1796, most recently in 1993. Most of the eruptions were phreatic. The eruptions have been small to moderate (VEI=1-2). In 1817, the crater lake collapsed, producing mudflows that destroyed three villages and 90 houses. The number of deaths is unknown. In late June of 1997, the color of the crater lake changed and seismicity and activity at the fumaroles increased but Ijen did not erupt.