A hotspot is thermally expanded buoyant mantle (bigger hot mantle that floats), which lifts an overlying plate. As hotspot material rises, the pressure drops so the hotspot begins to melt producing magma.

Hawaiian shield volcano Haleakala (right) is one of the shield volcanoes in Hawaii.  (others include Mauna Loa (below) and Mauna Kea. (Photos by Robert J. Lillie.) 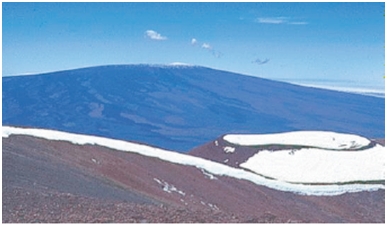 As heat input wanes, so does the volcanism. In a continental setting, dark basaltic magma is also produced in the early stages of hotspot volcanism, however as heat input wanes volcanism continues. As heat input wanes, the silica-poor basalt still rises toward the surface; as the magma rises, it melts its way trough thick, silica-rich continental crust forming shallow silica-rich (rhyolitic) magma chambers. The rhyolitic magma is thick and sticky, much like the magma produced at a subduction zone. This succession of erupted material results in fields of dark fluid basalt lava flows and cinder cones that are covered by rhyolite volcanoes.

Features at Yellowstone National Park record this sequence of (Fig. 7).

Fig 7: Hotspot magmatism at Yellowstone National Park.
The lower chamber, formed at the base of the continental crust contains basalt magma that melts the mantle as the hotspot rises.
The upper chamber below the surface contains rhyolite magma formed as the basalt magma melts its way through the crust and is enriched in silica.
(From Lillie, 2005)

Some active volcanoes in US National Parks formed as the result of hotspot related processes are: